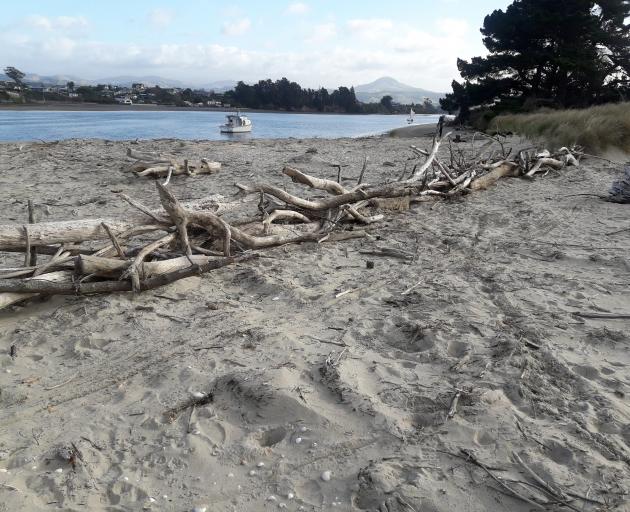 A Karitane driftwood fence used as a sand trap for the spit at the end of Waikouaiti Beach and Waikouaiti River. Pic: DCC
The Dunedin City Council has received national recognition for its "innovative" solution to erosion.

The citation, in the innovation in council-community relations category, which had 20 entries, was the only one made across six categories.

The Karitane Sand Spit, or Ohinepouwera, project involved using driftwood to create a natural windbreak, which would restore the sand spit by trapping windblown sand.

It began in 2019, led by DCC coastal specialist Tom Simons-Smith, who worked with Kati Huirapa Runaka ki Puketeraki, and volunteers from the wider Karitane community.

Mr Simons-Smith said he was proud to see the project receive recognition.

"Puketeraki Runaka deserve much of the credit, for engaging the community and helping me understand what solution might be most appropriate for their beach."

He said as the project progressed, broader community benefits were realised and lessons for future projects were identified.

Local Government Minister Nanaia Mahuta said it had been a simple but effective solution.

She described it as "a "non-engineering solution that the sector can learn from".

She received the overseas manager exchanges award and would travel to Canada.

The trip would focus on council operation, including community engagement, regeneration, climate resilience and adaptation and transformational projects.

"I would hope to bring back information which relates directly to my area of work, but also more generally on leadership and engagement with the community," she said.