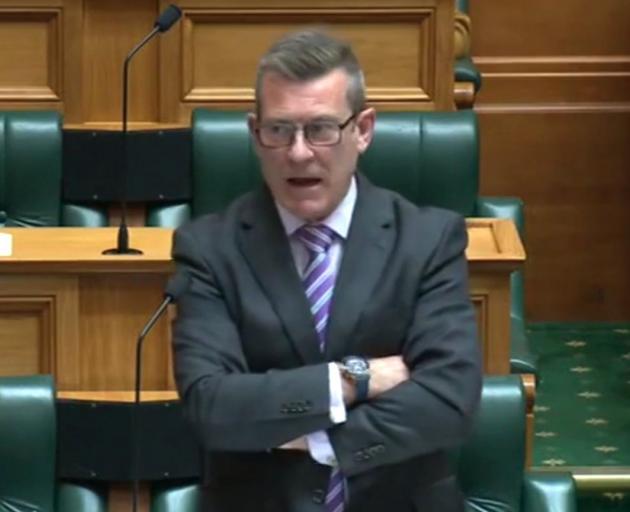 National Party Dunedin list MP Michael Woodhouse in questioning mode in the House. PHOTO: PARLIAMENT
A Dunedin MP is disappointed to have plummeted down the rankings as new National Party leader Christopher Luxon revealed a refreshed shadow cabinet with a noticeable lack of South Island representation.

List MP Michael Woodhouse was frank about his reaction to dropping from No 4 to No 18 in Mr Luxon’s new party rankings, unveiled yesterday.

It marked a fall from the front benches for Mr Woodhouse, who last week also lost his finance portfolio to Simon Bridges.

He now holds the portfolios of state-owned enterprises, ACC, statistics and sport and recreation, and is deputy shadow leader of the House.

‘‘Pretty disappointed, I can’t deny,’’ he said when asked how he felt about the change.

‘‘I’ve been on the front bench for over five years now, and I think I’ve done a good job in the roles that I’ve been given.

‘‘But that’s politics, and I’ve got new roles now and I’m just looking forward to throwing myself into them.’’

He had expected to lose his finance portfolio during negotiations between Mr Luxon and Mr Bridges.

‘‘I did, I guess, have a hope that I would keep one of the five major portfolios. That’s not the case and I’ve tumbled off the front bench, so that’s just the way it goes.’’

He referred questions about why he had dropped down the rankings to the party leadership.

Mr Woodhouse was one of four South Island MPs in the top 20, and the only one from Otago or Southland.

Waimakariri MP Matt Doocey, ranked at No 8, was the only South Island MP in the top 15.

Mr Woodhouse said there was the question of merit, and then representation regarding gender, ethnicity and geography to consider when assigning rankings.

Waitaki MP Jacqui Dean dropped out of the shadow cabinet, from 18 to 21. She retained her conservation and assistant speaker roles.

She said yesterday she was pleased to retain her roles, and Mr Luxon had made it clear he expected MPs to work hard on policy within their portfolios.

Mrs Dean has had a tumultuous few weeks after being embroiled in the controversial decision by Judith Collins to strip Mr Bridges of his portfolios, a move that led to Ms Collins losing her leadership.

Mrs Dean later expressed her unhappiness at being caught up in the scandal.

The fortunes of the South’s other MPs, Invercargill MP Penny Simmonds and Southland MP Joseph Mooney, were little changed.

One of the most eagerly anticipated revelations was what Mr Luxon would do with Ms Collins.

She remained just inside the top 20 at No 19, holding the research, science, innovation and technology portfolio.

Massey University politics professor Richard Shaw said there were ‘‘bugger all’’ South Island MPs in the party caucus because National was so heavily defeated at last year’s general election.

‘‘He just doesn’t have much to play with, has he?

‘‘I think he does have a real problem in the South Island, because of the caning the Nats got last year.

‘‘Come next year, he really relies upon the party board to have some kick-ass candidates in the South Island because he won’t be able to trot out too many incumbents of his own.’’

Next time he wants to make up stories to undermine the Covid teams he might think twice about his behaviour... he was mean and used punitive language when talking about the vulnerable. He needs to go.