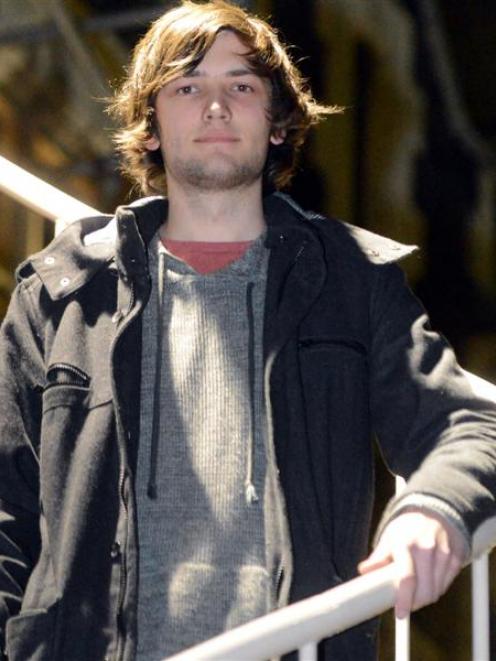 Second-year design student Liam Bigelow thinks the university could have handled the proposal to close the design school better. Photo by Linda Robertson.
The University of Otago is proposing to close down its applied sciences department, threatening the jobs of at least seven staff members.

University design students launched a campaign to save the department after they learned of the plan.

They fear some papers they signed up to study will cease to be taught before their degrees are finished.

It was founded in 2011, after a separate design department was closed in 2010, shedding a quarter of its staff.

The Otago Daily Times understands that, under the proposal, the bioengineering and clothing and textile sciences programmes will be incorporated into other university departments, while its design major will be eliminated.

Second-year design student Liam Bigelow found out about the proposal through a ''vague email'' sent to all design students early last week.

''I didn't really know what to think, and I was concerned for what it might mean for my degree,'' he said.

Mr Bigelow still has about a year and a-half of study left for his degree, a design and computer science double major.

The possibility design school staff would lose their jobs as a result of the proposed changes made them ''a lot more worrying'', he said.

''There's a good student-staff relationship in [the design school].''

Seven academic and three technical staff members work in the design school, which the ODT understands has about 40 equivalent full-time students (Efts).

The ODT further understands seven staff members would be made redundant under the proposal, all before the start of the academic year next February.

Tertiary Education Union representative Shaun Scott said he was reluctant to comment while ''still in discussion with members about our response'', but said the union was ''obviously concerned about the likely loss of jobs, and the loss of creative and enthusiastic staff from the university''.

Late last week, design students set up social media pages campaigning for the school to remain open, one of which has close to 500 ''likes''.

On that page, students posted a statement expressing ''worry that we as students are at risk of not getting a say in this decision''.

''We as students are standing up to the closure of the department as we think that it is short-sighted of a university that claims to strive for innovation.''

A group of students, who wished to remain anonymous, met university representatives yesterday and said they hoped to ''work through to a good outcome for the students''.

The university said design school Efts had decreased over the previous years.

Sciences pro vice-chancellor Prof Keith Hunter said ''whatever decisions are made, [students] will be able to complete their qualifications''.

He declined to comment further because the university was in the process of consulting with students and staff about proposed changes.

The proposal for a consultation on disestablishing the department was voted through the university senate on May 27, and passed through yesterday's university council meeting in the senate minutes without debate.