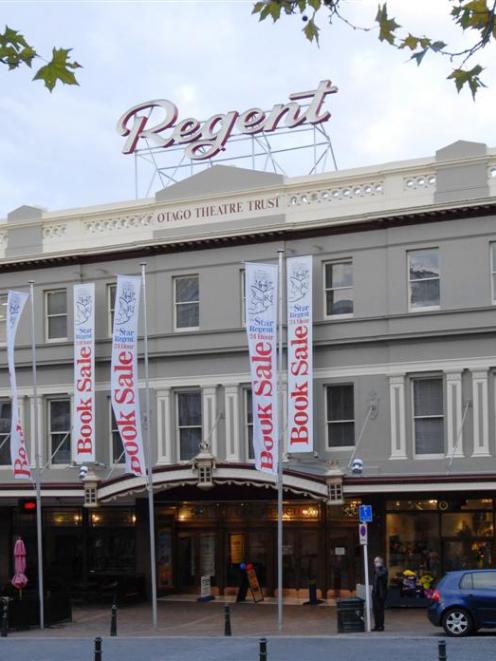 The Regent Theatre. Photo by Gregor Richardson.
Regent Theatre Trust chairman Mike Shield is "quite relieved" the $6.4 million redevelopment of the theatre has emerged unaffected by the Dunedin City Council's budget cuts.

Mr Shield said yesterday the trust was "very pleased" its project remained on track for construction to start at the end of October.

The project is still dependent on the trust raising $2 million as its contribution.

"That's the proviso from last year's annual plan and that hasn't changed."

Mr Shield would not say how much had been raised so far, or who had made contributions.

"It's a big ask of a voluntary organisation, but we've got things in place."

Asked if the trust was close to its $2 million target, Mr Shield said, "I wouldn't say it's close, but there are definitely things in motion.

There's a wee bit to work on yet."

He expected the fundraising deadline to coincide with the council's annual plan being "locked down" and he was confident the trust would have the money by then.

"But that's not what we're aiming for."

The trust has the proceeds of four or five of its annual 24-hour book sales put aside and has received private contributions towards the project.

However, approaches to other sources of funding had to be scheduled carefully.

"Some of them don't release funds until six months prior to the project starting, or even being completed.

"So there's a bit to work on in terms of time-tabling.

"The crux of it for us is that the council's agreed to go ahead with the original plan, which gives us just a lot more stability as an organisation.

"We know where we stand."

Also pleased with yesterday's council decision was Otago Festival of the Arts director Nicholas McBryde, who had spent an anxious three months searching out venues to fit around the council's original timetable for the redevelopment of the Dunedin Centre and town hall.

"It means that all the rearrangements that were forced upon the festival last October can now all be reverted."

Mr McBryde said the Southern Sinfonia would be able to use the town hall rather than the Regent Theatre.