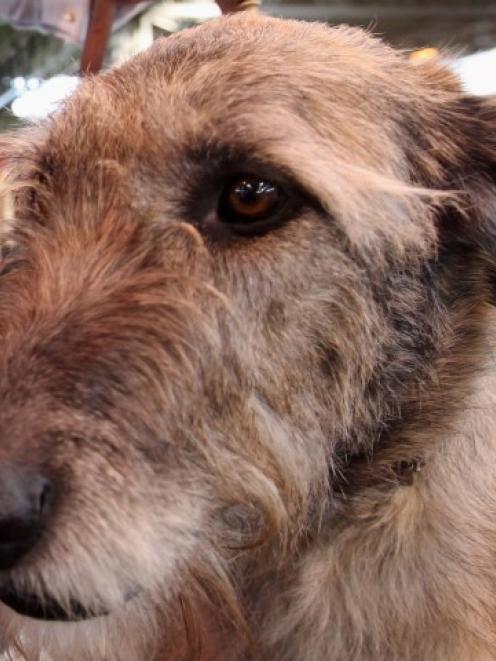 The woman was attacked by up to three Irish wolfhounds. Photo Getty
A Dunedin woman required surgery after a dog attack so horrific it was ''more like a shark attack''.

The woman, who did not want to be identified, was delivering the Otago Daily Times in Walter St, in the Glen, about 6.30am yesterday when she was attacked by up to three Irish wolfhounds.

Her partner said the attack was so frenzied it left ''blood everywhere and pieces of flesh everywhere''.

The woman would require multiple operations, including plastic surgery, and it was not yet known if she would walk again, as one of her calf muscles was ''virtually all gone'', the man, who did not wish to be identified, said. 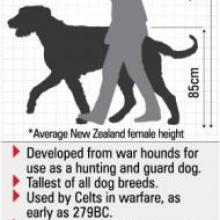 He was also delivering newspapers nearby and had been left shaken and angry after the attack on his partner.

''There are these three dogs controlled by one guy, which is crazy because they are the size of a small horse,'' he said.

''[She] fell to the ground in fright and rolled down a big bank and the dogs just took to her, just tearing chunks off.

The owner had two of the dogs euthanised and the Dunedin City Council's animal services department was investigating the extent of the third dog's role in the attack, the council said in a statement.

''The dog owner was shaken and distressed by the incident,'' the council said.

''No further decision will be made [on the third dog's fate] until the DCC officers have spoken to the victim.''

Senior Sergeant Craig Brown said the woman's injuries were among the worst he had seen from a dog attack.

''They are very nasty wounds.''

The victim's partner said she was lucky to survive the attack, as the dogs had made attempts to attack her face and throat, leading to defensive wounds on her arms.

''She's not coping well mentally or physically,'' he said.

Her recovery would take months and would affect her ability to work her three jobs.

''None of her jobs involve sitting down, so she is traumatised by the thought of that [losing income] as well,'' he said.

He thanked the members of the public who came to her aid immediately after the attack, saying they ''were great'' and applied first-aid.

A Dunedin Hospital spokeswoman said the woman was ''progressing well'' after surgery.

But the breed was not registered as a menacing or aggressive breed and there were limited numbers of them in New Zealand.