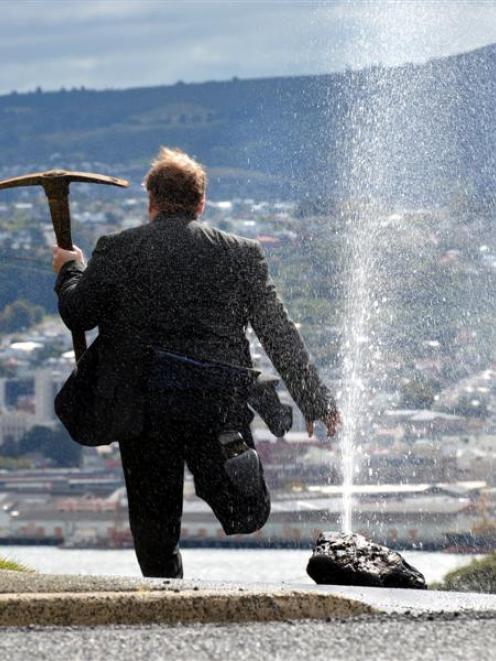 An angry ratepayer destroys his recently installed water meter after learning of Dunedin City Council plans to charge households for water use. Photo by Stephen Jaquiery.
Dunedin residents could soon be paying every time they turn on a tap, although the Dunedin City Council is insisting the installation of water meters is ''a trial''.

The Otago Daily Times has learnt a ''small trial batch'' of meters has been covertly installed over the past year by contractors digging up footpaths for underground ultra-fast broadband (UFB) wiring.

A council spokesman denied the meters had been sneaked in, saying the project was timed to tap into the UFB work.

''It's about basic economies. If we went in and dug up the same piece of road that had just been dug up for broadband, we'd be flooded with complaints.''

A leaked document said the revenue from the water meters could be used to help pay off Forsyth Barr Stadium debt, although water used for civic amenities - including the stadium pitch - would be exempt from the water charge.

The document suggests households will be allowed 45 litres of free water each day, enough for drinking water, three, minute-long showers and six flushings of the toilet before being charged at 50c per litre thereafter.

It goes on to explain the estimated cost of water to wash a medium-sized car will be $4; watering a lawn $9 and extra toilet flushes at $1.50.

For families who prefer to use the bath, the water department suggests sharing to save costs, with three (not too soiled) people able to follow each other in the same water with no undue health risk.

Households will be encouraged to collect rainwater, which could be bucketed inside in the event of hosting guests who may also need to use the toilet.

Anticipating a reluctance to wash cars, the document recommends city parking officers be given the authority to ticket cars they deem to be ''unnecessarily dirty''.

DCC councillors have called an emergency meeting and a statement is expected at noon.