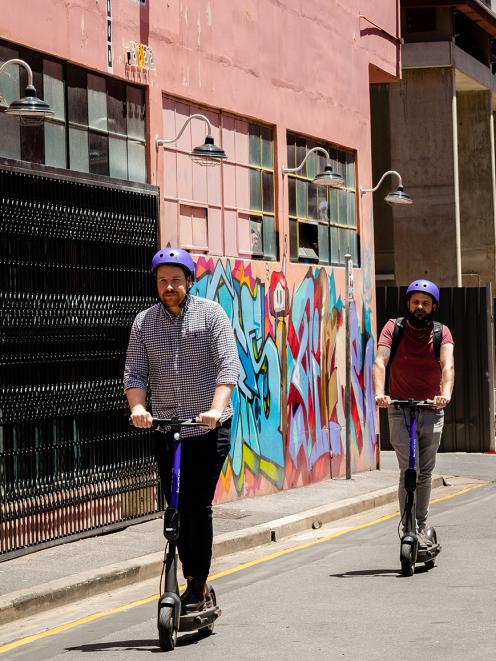 Beam Mobility is working with the Dunedin City Council to get its Beam e-scooters on to the streets of Dunedin. PHOTO: NAT ROGERS
Lime may not have the monopoly on e-scooters in Dunedin for much longer.

Singapore-based company Beam is negotiating with the Dunedin City Council to operate its line of e-scooters in the city.

‘‘We are actively engaging with the council and we would like to be able to launch in a number of markets in the very near future,’’ Mr Kitschke said.

‘‘The most important factors to consider before a launch are safety, city amenity and engaging with and securing the support of the local community.

‘‘Dunedin City Council is one of a number of councils we are talking to about launching.’’

Beam was founded in July 2018 with the vision of making cities flow better.

It already has e-scooters operating in South Australia, Western Australia and Christchurch, and is about to launch in Auckland.

By providing a range of innovative micro-mobility solutions, the company believes it can help people get around their cities more easily, encourage greater use of public transit networks and ultimately reduce car ridership and the congestion it causes.

At present, the company is focused on e-scooter hire but also plans to develop other forms of e-transport soon, such as e-bike and e-moped hire, as well as car-sharing options.

Reviews show safety is a major feature of Beam scooters.

Helmets are provided for riders, the scooters have a top speed of 16kmh (noticeably slower than competitors) and two forms of brakes.

The operating apps for Beam and Lime are similar, but their operating prices are not. Beam is about 8 cents per minute cheaper.

Flamingo Scooters, which operates in Auckland, Wellington and Christchurch, said that it did not have immediate plans to expand its operations into Dunedin.

A spokesman said the New Zealand and Australian-based company was focusing on its three existing markets.

Other operators such as Jump and Neuron did not respond to requests for information.

DCC community services general manager Simon Pickford confirmed the council had been approached by Beam, but said discussions were still at an early stage.

‘‘Nothing has been agreed or formalised. Launch dates have not been discussed.’’

The council had had initial inquiries from other e-scooter companies, but they had not progressed further.

A footpath courtesy zone for e-scooters, skateboards and mobility scooters had been trialled in Dunedin’s main streets since August last year, and was due to finish later this month.

The findings of the trial would be reported to the council in March or April.

‘‘The zone runs along George and Princes Sts, between Albany St and Rattray St.

‘‘It aims to encourage footpath users to be considerate of other people in this busy area. Signs and markings have been installed throughout the zone.’’

Police in Dunedin had been watching for unsafe rider behaviour but had not been issuing regulatory penalties for breaking what was a voluntary limit, he said.

Does it matter who rents them? Until they are picked up bu EV's, they are contributing to global pollution. Just toys for the boys and girls, and hazards on the footpath.