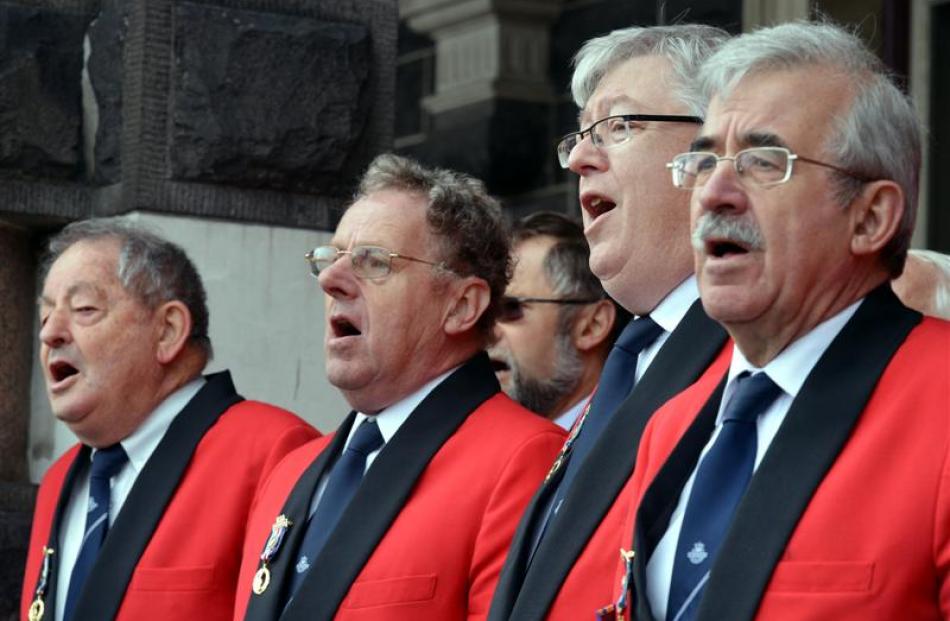 Members of the Dunedin RSA choir sing at the parade reception at the Dunedin Railway Station. Photo by Stephen Jaquiery.

The forecourt of the Dunedin Railway Station was once again alive with soldiers in uniform yesterday as the clock was turned back 100 years to mark the departure of Otago and Southland troops for the battlefields of World War 1.

The soldiers from the 2/4 Battalion of the Royal New Zealand Infantry Regiment were among hundreds of people gathered at the railway station to take part in a re-enactment of the 1914 embarkation of the first southern soldiers who served in World War 1.

A reception at the railway station, reminiscent of farewells for various contingents that departed from there for overseas, was one of a series of events held in Dunedin yesterday to commemorate the centenary of the embarkation.

It was the first major event of Otago and Southland's commemorative activities marking the centenary of the war.

On September 22, 1914, thousands stood in front of the station to farewell 1600 men from the Otago Infantry Battalion and Otago Mounted Rifles.

Yesterday morning, about 380 people from Invercargill and Gore who travelled to Dunedin by train were at the station to greet about 200 people arriving in a parade that re-enacted embarkation parades from the Oval to the railway station.

Military historian Dr Aaron Fox, of Gore, who was involved in organising southern WW1 centenary celebrations, said organisers were pleased with the turnout.

The atmosphere at the railway station in 1914 would have been one of great excitement and anticipation on the part of young soldiers, many of whom were probably keen to get overseas and not miss out on the action.

''They had no idea what they were going to.''

Thousands of people waving flags and clutching hankies lined the parade's path from the Oval along Princes St and to the station in 1914. Yesterday, several dozen people quietly lined Princes St.

Others joined the march from the Octagon and sat and stood to hear speeches from the mayors of Invercargill and Dunedin outside the station.

Dunedin Mayor Dave Cull said Otago and Southland communities should still be very proud of the eager, dutiful and selfless volunteers that sailed away to a ''brutally inept'' battle that stole ''a generation of opportunities from our community''.

''They left from this railway station bright and positive, their lives and dreams and those of their families and whanau still ahead of them. Slightly over three-quarters returned. None returned unscathed.''

Invercargill Mayor Tim Shadbolt said the two provinces had shared much, and it was good to see the them back together to commemorate such an important occasion.

''Thank you Dunedin for welcoming us here.''

Rena McIntyre, of Dunedin, said the parade and the reception were ''wonderful'' and ''quite moving'', while Wayne and Brenda Cameron, of Dunedin, who filmed the event, said they felt it was important to take part.

''It was very emotional. I mean we've got grandfathers who would have left to go to war from here. We feel proud and sad today,'' Mrs Cameron said.

Norman Dickie (97), from Gore, said the trip on the train to Dunedin had been full of wonderful memories of train travel.

He was born in 1916, but still remembered the lingering effect on his parents of the death of one of their farm workers in World War 1.

A host of other WW1 commemorations will be held during the next few months in the lead-up to the 100th anniversary of the New Zealand troops landing at Gallipoli on April 25, 2015. 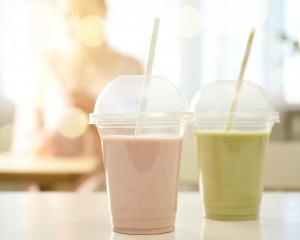