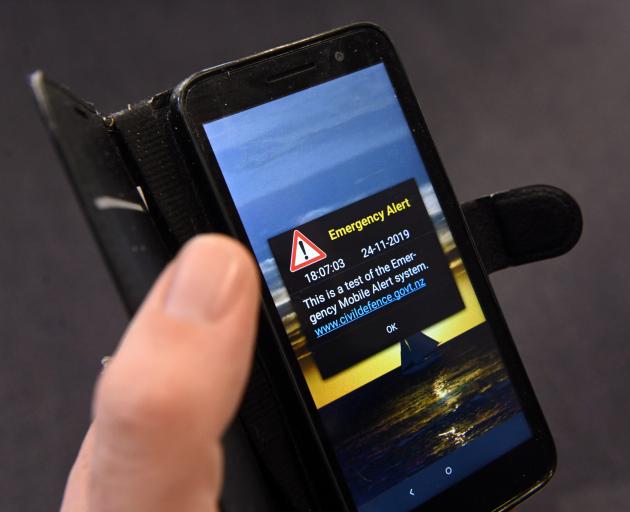 The trial — the third of its kind in recent years — sent a test emergency alert to cellphones across the country between 6pm and 7pm.

Phones capable of receiving the alert delivered a loud, penetrating tone and a notification displayed on their screens.

In Dunedin, phones began receiving the messages shortly after 6pm and social media quickly lit up.

Most people reported receiving the test, although some appeared to have been caught by surprise, despite recent advertising promoting the trial.

A smaller number of people appeared to have experienced glitches — receiving the message, but no sound, or no message at all.

"There was 100% receipt of the test in my house ... that was two different networks," he said.

He expected to see an improved hit-rate compared to the last test when results were confirmed, as older phones had been replaced by newer models but no system would ever be perfect, he said.

Ministry of Civil Defence and Emergency Management director Sarah Stuart-Black said about 60% of New Zealanders received the alert during last year’s trial, and that was expected to have increased in last night’s test.

The Emergency Mobile Alert system was designed to provide "fast and reliable" information when emergencies threatened people’s lives, health or property, she said.

The trial tested Ministry of Civil Defence Emergency Management systems, cell towers and the ability of individual phones to receive an alert.

People outside mobile coverage zones, or with incompatible phones, would not have received the test message, and phones bought overseas might display different messages — including “presidential alert”, she said.