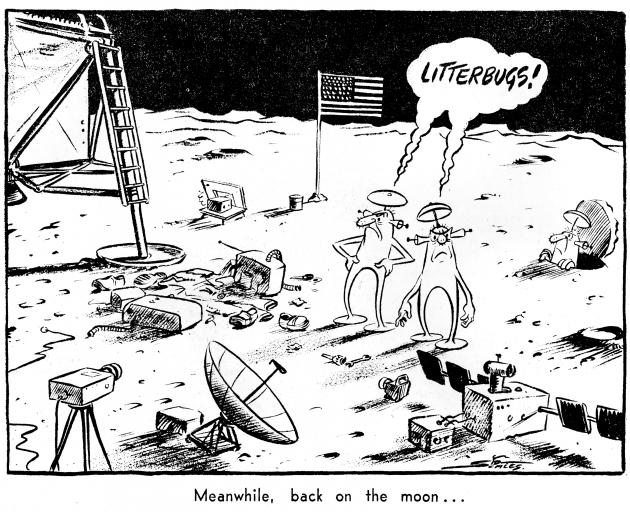 News of the impending lunar landing led the Otago Daily Times front page for six papers in a row, as the progress of the three Apollo 11 astronauts captured the world's imagination.

On July 22, this paper delivered the stunning news via a splash headline: "Critical lift-off early today - Apollo spacemen conquer moon," along with excited reports that the lunar walk had been successful and moon rocks were collected.

Stories throughout the thick paper carried a mood of unbridled optimism, including a page 1 report that President Nixon was awaiting the next space goals.

A tongue-in-cheek story from the Press Association, also on the front, reported Prime Minister Keith Holyoake had received a memo bearing the dire news the moon was made of cheese, which "poses a new and serious threat to our export markets which Cabinet may wish to consider".

Deeper in the broadsheet, a report from United Press International had US vice-president Spiro Agnew renewing his proposal to put a man on Mars by the end of the 20th century, while another yarn was headlined "Space colonies likely to be eventual aim". 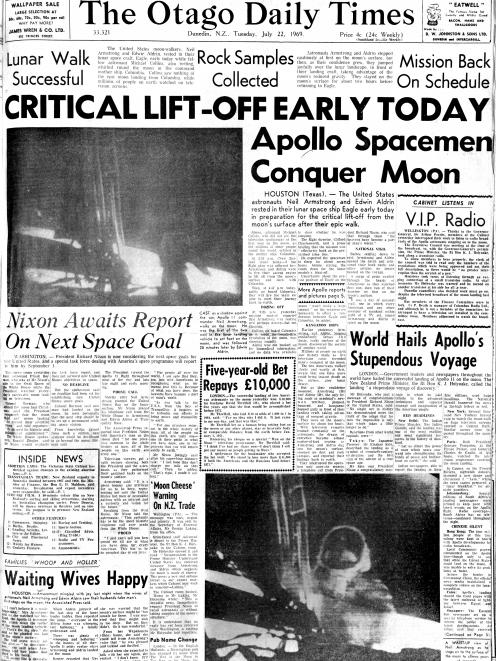 Across on the leader page, and beside an editorial on North Vietnam president Ho Chi Minh's threat to step up the war in Vietnam, was a cartoon from long-time ODT cartoonist Sid Scales depicting an astronaut replacing one star on the American flag with a moon.

The following day, a report of the astronauts heading for home made the front page, but it appeared the news editors were beginning to tire of the moon landing.

The lead story that day reported a cost-of-living rises plan was likely for state pensions, while the feature photo was Otago wing Bruce Hunter streaking across the field to score the second of his five tries in a match against Marlborough played at Carisbrook, which Otago won 39-3.