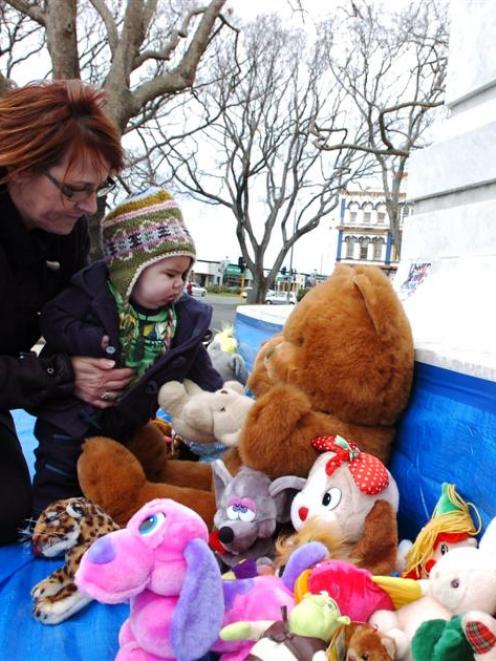 Mary Sharp and her grandson Leeroy Gillon-Reynolds (6 months) place a teddy bear at the base of the Cenotaph in Dunedin on Saturday as part of a national event to remember children who have died or been abused at the hands of their caregivers. Photo by Jane Dawber.
Toys instead of wreaths were placed at the bottom of Dunedin's Cenotaph on Saturday, in memory of children who died in the worst imaginable circumstances.

Similar events were run simultaneously at memorials across the country by Nation of Advocates for the Rights of Kids (Nark), a group set up by Cherie Kurarangi Sweeney to raise awareness of child abuse in New Zealand and the need to speak out when abuse was suspected.

Ms Sweeney founded the group after being branded a "nark" for speaking to police about the death of Ngaruawahia baby Serenity Scott-Dinnington.

Dunedin co-ordinator Pete George said people arrived at the Dunedin event in dribs and drabs from noon to 3pm, when the event was on.

Dunedin women Mary Sharp and Catherine Syme said they had come to drop off some toys because they wanted to show their respect for the child victims of abuse and raise awareness of the problem. People who knew abuse was occurring had to say something instead of keeping silent, they said.

"People must know, and that's what upsets me. You can't tell me people don't know this stuff's going on next door. Unless we all stand up nothing's going to change," Ms Syme said.

Ms Sharp said she was the full-time caregiver for her 6-month-old grandson, who "could have been somewhere where it could have happened to him", and she wanted to say some prayers for the children.

Mr George said the toys would go to various social agencies in Dunedin.

The RSA supported the event being held at the Cenotaph.