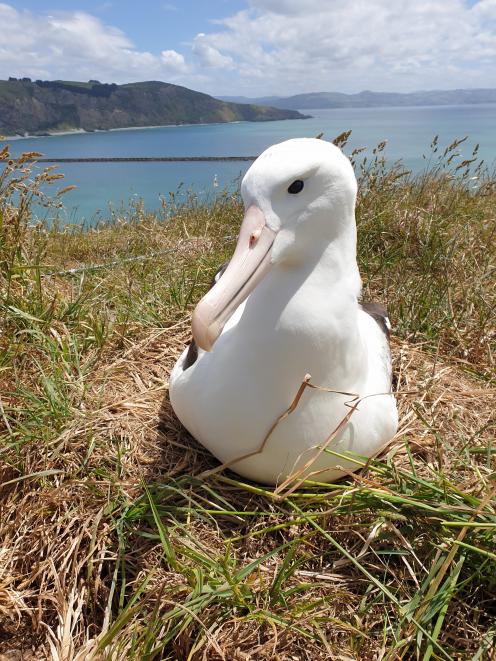 A northern royal albatross at the Taiaroa Head colony on Otago Peninsula. PHOTO: SUPPLIED
Albatrosses  have laid the second-highest number of eggs recorded at the Royal Albatross Colony.

More than 120 royal northern albatrosses have returned to the colony in Taiaroa Head, on the Otago Peninsula, for the coming season.

Among those are some familiar and popular faces.

Department of Conservation ranger Sharyn Broni said the 40 eggs recorded would start hatching in mid-January, before fledging began about seven months later in September or October.

It was a sign of a good season ahead.

Royal Albatross Centre operations manager Hoani Langsbury said the return of the albatrosses and the high number of nests and eggs brought positivity to the end of a challenging year.

Fan favourites LGL, a female, and LGK, a male — parents of Karere, star of the 2018-19 season — were seen mating and laying an egg in view of the livestream camera for the first time.

The egg had been candled to check if it was fertile and the camera was moved closer to the new nest at the weekend.

It was their third breeding attempt at the colony, — they first got together in 2017.

The Royal Cam livestream is run with the support of New York university Cornell Lab of Ornithology, which partnered with the programme in 2019 and significantly boosted its reach internationally.

Last season, between December 2019 and September 2020, the livestream received more than 2.5million views globally and was watched for 584,033 hours.