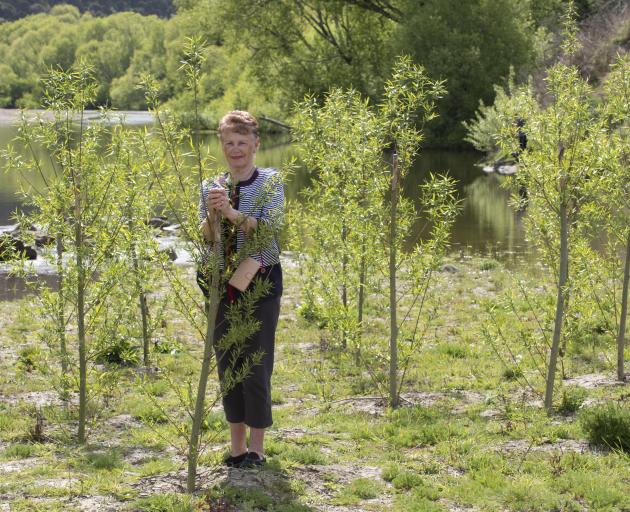 Judith O’Connor, of Outram, says willow trees planted at Outram Glen, alongside the Taieri River, could be more of a problem than a solution. PHOTO: GERARD O’BRIEN
A stand of newly planted willow trees along the Taieri River has sparked concerns from a local resident who fears they could cause severe damage in the river’s next flood.

But the Otago Regional Council says the trees will do the opposite, and help to control floodwaters.

Judith O’Connor, of Outram, said a "large island" of gravel and rocks, along with three to four mature willow trees, was pulled from the river banks and deposited into the riverbed, upstream of the Outram Bridge, during floods in February this year.

The regional council had since planted about 60 willow trees in their place.

"Should this latest planting be allowed to grow ... they will create a willow forest ... it could be the cause of severe damage to the bridge itself at some date in the future," she said.

"I would have expected the Otago Regional Council would lead by example in clearing the waterway of this mess."

Ms O’Connor said the council had spent a large amount to remove willows from the lower Taieri River in the past.

She wanted the new plantation, as well as a large pile of rocks and gravel from the riverbed, to be removed to make it easier and faster for future floodwaters to escape under the bridge.

Council engineering manager Michelle Mifflin said the area was not an "island of deposited gravel" but a part of the riverbank that was scoured out in a 2017 flood.

"The new scour has an adverse effect on Otago Regional Council flood banks downstream of the bridge, because it redirects the river flow in a way that will increase erosion."

The council planted the willows to stabilise the scoured area and to deflect future flood flows back towards the main river channel, to avoid further erosion of the riverbank, she said.

The trees planted were also hybrid willows, as opposed to crack willows, which were prone to breaking up and self-seeding, causing issues in rivers.

"Hybrid willows grow in a straighter, more uniform way and to a lower height, making them useful for erosion control.

"[The council] occasionally manages crack willows around the lower Taieri as part of routine maintenance."

Once matured, the hybrid willows would help to slow the river flow, she said.

The ORC is following science from Britain where creek and river surrounds are being replanted to deliberately catch and slow flood waters. This has been shown to reduce overall flooding and results in less damage all over.