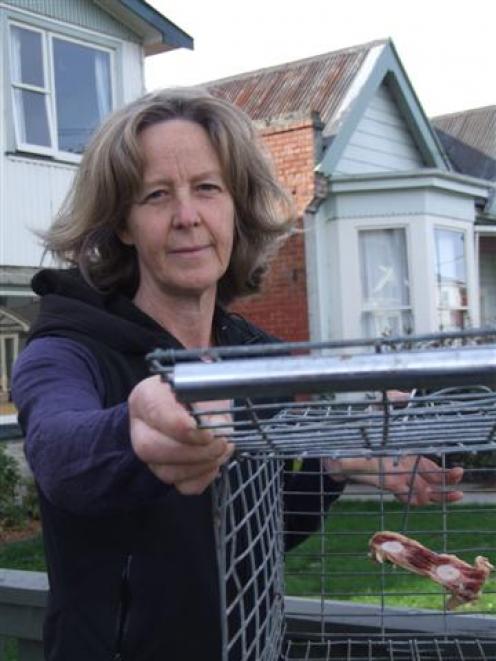 Tabby trap: Carol Clark, of Port Chalmers, prepares to set a live trap for feral felines which roam the streets around her daughter's Castle St flat. Photo by Bruce Munro
The Dunedin City Council has nothing in its budget with which to tackle the potential feral cat population problem in North Dunedin.

While it is responding to cat complaints as they arise, the city council confirmed it does not plan to allocate funds to replace the SPCA's lapsed feral cat control programme.

Former vet nurse Carol Clark is concerned no-one is taking responsibility for dealing with the many hundreds of cats she says are abandoned by students, and which form colonies, breed and fight during the summer months.

For the past decade, the Otago SPCA has spent about $15,000 a year of council grant money on trapping and euthanasing feral cats in the campus area.

But, with the SPCA relinquishing that contract in line with its "saving lives" policy, there is now no active programme to keep on top of the feral cat problem.

Council environmental health and animal control team leader Ros MacGill said her staff responded to complaints as they arose, but that there was no funding for an active control programme.

Ms Clark, who owns a rental property in North Dunedin and whose daughter flats in the area, said she was concerned by the number of roaming cats she had seen suffering from lack of food and shelter, and preventable diseases.

She was setting a live cat trap at her daughter's flat, and planned to try handing over any cats caught to the SPCA.

Ms Clark said she understood the SPCA's concern about any association with the euthanasia of cats.

But she believed many feral cats were "better off having a peaceful end, as opposed to suffering a long and protracted death due to cold, disease and starvation".

When she contacted the council, she was told staff could only act if the cats posed a health risk, she said.

Otago SPCA executive officer Phil Soper said his organisation stopped trapping and euthanasing feral cats on the council's behalf before the start of what would have been this year's control programme.

"It's against our philosophy to put down perfectly healthy animals," Mr Soper said.

When the SPCA was running the programme, a staff member was working up to 10 hours a day for three months trapping and euthanasing up to 200 cats and kittens.

"In those three months, there were a lot of cats we didn't get," he said.

"It's hard to find a starved cat - they are there because there is a food source. But they would have all the normal problems with diseases and injuries that come from living in a colony."

Ms MacGill said there had been no recent complaints about feral cats in the student area.

Property owners should control pests on their properties, and landlords should discourage students from keeping pets.

If it became apparent there was a significant problem, an application for funding for a feral cat control programme would have to go through the annual plan process later this year, for next year's budget, she confirmed.

If people thought it should be included in this year's annual plan they could make a public submission, she said.

The public submission period will run for a month from mid-March.