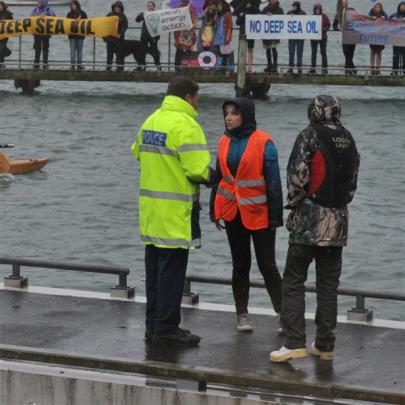 Police talk to protesters at Back Beach yesterday. 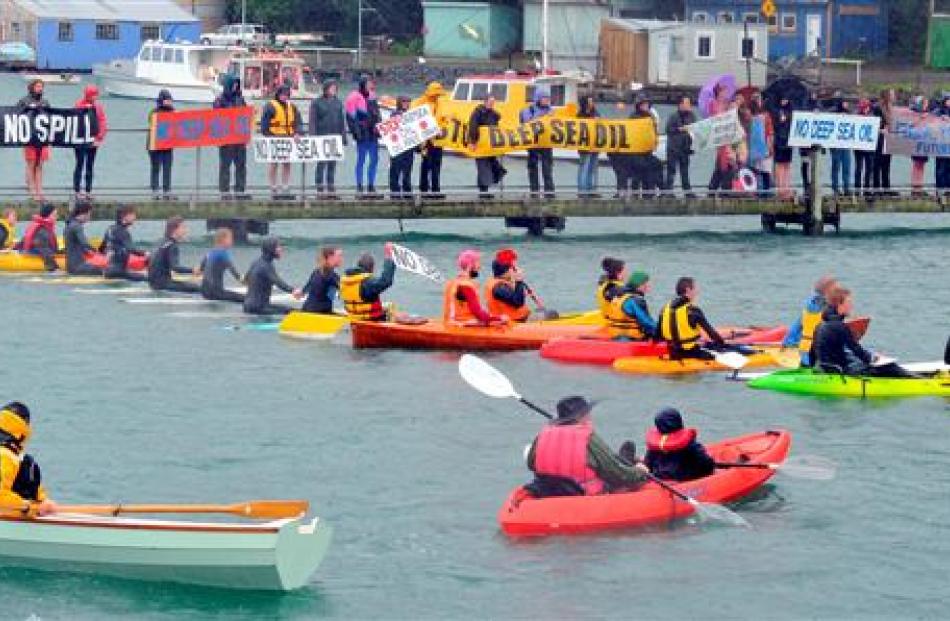 Oil Free Otago has established a ''rapid response'' team of up to 260 people to take to the waters around Otago to hinder Anadarko Petroleum Corporation's deep-sea drilling operations.

Oil Free Otago spokeswoman Niamh O'Flynn said the team was established during the Oil Free Future Summit in Dunedin at the weekend, and hinted it may be used to block the shipping lane in Otago Harbour to stop Anadarko vessels from using Dunedin as a servicing port.

The flotilla could also be rallied in the open waters around Otago's coastline as part of its resistance to the petroleum giant.

The logistics of how their protest would be carried out and what it would involve were still to be decided, Ms O'Flynn said.

More than 250 protesters braved wet weather yesterday on the final day of the summit.

''It's a cold wet day and we've still got more than 250 people here showing their opposition to Anadarko and risky deep-sea drilling, and they [Anadarko] can expect further opposition in the future,'' he said.

Initially, it was intended to send people in boats to block the shipping lane between Quarantine Island and Goat Island.

But the weather forced some instead to hold anti- drilling banners on a wharf at Back Beach, in Port Chalmers, while others took to the water in kayaks.

Ms O'Flynn said the action was a practice run for future action when Anadarko vessels arrived in Otago.

However, Senior Sergeant Steve Aitken, of Dunedin, was concerned about the safety of the protesters.

''While everyone has the right to protest, they need to consider the safety of themselves and any other people while they are doing it.

''Protesting at sea can be dangerous and I would encourage those participating to ensure they take all safety precautions.''

The summit was the first of its kind in New Zealand, and coincided with Anadarko's exploratory deep-sea drilling off the coast of Raglan.

Anadarko's drill ship Noble Bob Douglas was preparing to move south next month, where it will begin drilling 60km from Taiaroa Head.

During the conference, it was revealed the Dunedin City Council held shares in petroleum companies, worth $1.7 million.

The investments account for about 5% of the council's holdings through the Waipori Fund.

Ms O'Flynn and Mr Hughes said the council should not hold shares in any company that produces fossil fuels, in the same way it avoids investing in tobacco and arms companies, and urged the council to divest its investments in oil companies.

Dunedin Mayor Dave Cull defended the investments, saying they were designed to make a return for the benefit of ratepayers.

Cr MacTavish said the council did not have a formal stance on ethical investment - only that it did not invest in tobacco or arms companies.

''This is an opportunity for us as a community to have a conversation about what we collectively feel comfortable making money from.

''It is important to have this conversation.''

She said a report had been commissioned into ethical investment opportunities, and it would be discussed by council later this month.

''My personal feeling is that I'm not very comfortable with investing in further fossil-fuel exploration.

''I would prefer us to be invested in much more future-focused industry,'' she said.