Fly my pretty, or plummet

By Molly Houseman
2 Comments
A new interactive machine at Dunedin Airport shows passengers how their flights manage to stay thousands of feet in the air.

The Otago Museum’s Flight Zone machine was unveiled yesterday and will provide what is perhaps comforting knowledge for some nervous flyers. 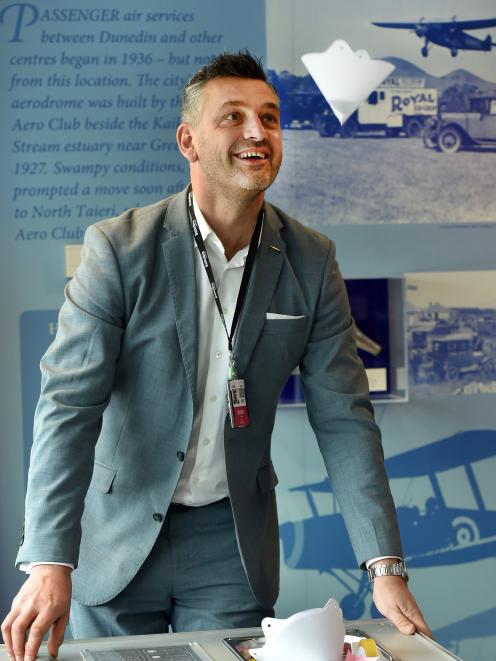 Dunedin Airport chief executive Richard Roberts enjoys the new Otago Museum Flight Zone machine, which was unveiled on Tuesday and shows passengers the science behind their flight. PHOTO: PETER MCINTOSH
The machine, which will be a permanent feature at the airport, demonstrates how the shape of an object determines whether it ‘‘flies, glides or plummets’’.

People can build different shapes using the materials provided and then start the machine, which creates an air flow from a large vent on top, to see whether their creation is capable of flight.

Marketing and customer experience manager Charlotte Scoles said the machine was built in Germany, specifically for the airport.

It arrived by ship and was meant to be installed earlier in this year, but was delayed due to the Covid-19 crisis.

It was intended to teach passengers, big and small, about the science of flight, she said.

‘‘It is really really cool - the kids are getting stuck into it but so are the big kids.

‘‘There has been quite a few of our team members having a really good play on it.’’

While it was educational, it was also a good way for passengers to fill some time.

It was installed at the top of the escalators in the airport’s departures area - a space which had been in the airport since 2006 but was in need of a revamp, she said.

The space would also host more of the interactive machines from the Otago Museum’s science centre in the coming months and years.

I bet the cost of the exhibit wasn't financed by Roberts's pay cut! I bet he took his full salary during the lockdown as airport manager whilst doing nothing! Hardly a newsworthy story, just more face time for the highest-paid parking lot attendant in New Zealand!

This is interesting because in fact no one knows how aircraft fly.
We used to teach Bernoulli's Principle as a way of explaining it, but while that is useful in getting students to understand how an aircraft stalls, it is not actually scientifically valid.
NASA has admitted that they don't know the answer, and it is still a mystery to science. So I would be very interested to know what they are telling these people. I am certain of one thing though, that it is not the truth.