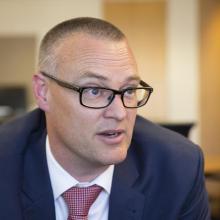 David Clark
District health board chief executives will be held to account if safe staffing levels for nurses and midwives are not in place by 2021, Health Minister David Clark says.

Yesterday, Dr Clark, in a move probably  made to encourage nurses to settle their long-running pay dispute, announced DHBs, nurses and the Ministry of Health would  sign an accord on safe staffing on Monday.

The accord will commit all parties to implement and monitor Care Capacity Demand Management (CCDM) — the system intended to ensure enough nurses and midwives are available to work — within three years.

Ensuring that was achieved would be a performance expectation for DHB chief executives, Dr Clark said.

"As Minister of Health I will be requiring DHBs to make good on all staffing commitments."

Nurses, midwives and other health workers went on strike a fortnight ago — the first nationwide stopwork by nurses in 30 years.

With the Government having maintained for some weeks that no new money would be available to settle the nurses’ dispute, the accord is likely to be an attempt to shore up the DHBs offer and convince nurses — who have  previously rejected a pay offer their union recommended they accept — to take the proposed deal.

NZNO chief executive Memo Musa said understaffing was the top concern of the New Zealand nursing and midwifery workforce, and commended Dr Clark for drafting the accord.

"Nurses have also said that a reason they leave the profession is because their high standards have been compromised because of unsafe staffing and also because they are dissatisfied by not being able to take time to advance their own skills or to train others," Mr Musa said.

"The accord addresses this issue by encouraging many back into the workforce with the commitment to safe staffing."

A training commitment for nurses and midwives, according to the contract used for doctors, has been written in to the accord.

Dr Clark yesterday released a letter to the NZNO, the ministry and DHBS, which said he understood all parties supported the accord.

The document is due to be signed in Wellington on Monday.