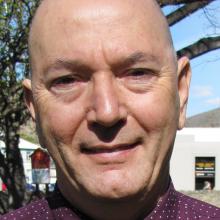 Yoram Barak
As New Zealand’s population gets older, the number of people with dementia will rise, but also the number of older people with other mental health issues and addiction problems, a Dunedin geriatrician says.

"The growing life expectancy of people who have struggled with mental health issues throughout their life will impact on our services," Prof Barak said.

"When I started practising psychiatry, going on 30 years ago, it was quite rare for a psychogeriatrician to treat a patient suffering from schizophrenia. Their life expectancy wasn’t that high."

"We have been able to improve life expectancy all over the world, and also for vulnerable patients like people struggling with schizophrenia or intellectual disability, and part of what we have to now manage is that they are now presenting to old-age psychiatry services," he said.

"We have not designed — neither here or anywhere in the world — the proper care facilities for ageing schizophrenic patients.

"We can’t put them in a rest-home designed for people with dementia — that wouldn’t be humane."

Adding to the difficulties of treating a complicated mental illness, patients such as schizophrenics were likely to have a history of obesity, hypertension, diabetes and smoking, and 50% abused alcohol and/or drugs.

"We are dealing with a complex combination of physical and psychological issues."

Recent research suggested two out of every three inpatients at emergency clinics were elderly, a trend which would become more pronounced in the next 10 years.

Hence gerontology — the scientific study of ageing —  needed to be emphasised in medical schools, as  over-65s would  come to represent the majority of patients seen by doctors.

"Age-associated mental disorders like dementia are growing way more than expected, and that’s more than just the fact that more and more people are elderly.

"Something is happening, but we haven’t understood what is driving that growing rate of dementia, that will become a burden on the health system in general and mental health specifically ...  We can’t just keep going as we were."

Adding to the issues health services had to consider was what the Royal College of  Psychiatrists recently termed "the invisible addicts" — the increasing number of over-65s abusing  alcohol and  drugs such as opioids.

"We have not given enough focus to the fact that the baby boomers have a huge issue with alcohol and drug abuse, and statistically the fastest-growing group of alcohol abusers are women over 65," Prof Barak said.

"We are looking at something which may not have been a great focus of mental health in general, or psychogeriatrics, but it is set to become such now."