One third of patients were not treated within acceptable time frames as the Southern District Health Board reacted too slowly to a looming urology crisis, an investigation has found.

A newly released report was instigated by health and disability commissioner Anthony Hill after his office received 38 complaints related to the service within a short period.

It said there had been concerns about urology since at least 2014, but an SDHB-commissioned review did not start until June 2017.

"When the system was unable to meet the demand, the DHB was slow to act in a way that was cohesive and would bring effective, sustainable improvement ... the delays in being treated and the poor communication (with patients) frequently led to frustration and distress for patients.'' 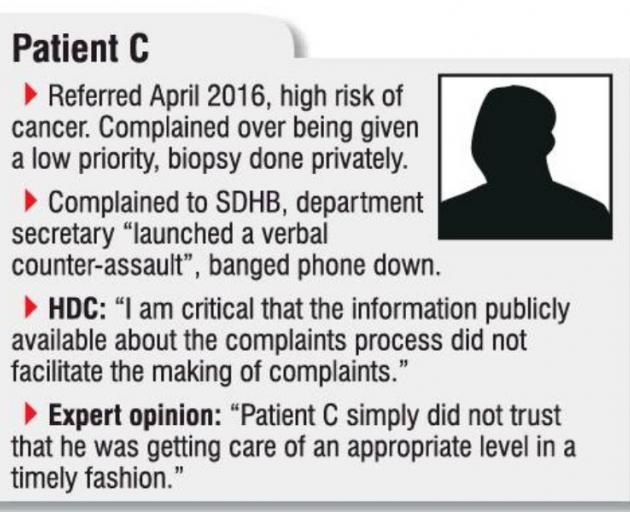 The commissioner's report detailed strained relationships between clinicians and management, severely stressed staff, clinicians unwilling to work together, and an inadequate response from management to growing patient demand.

Despite numerous warning signs, it appeared it was not until 2016 that SDHB management fully appreciated the clinical risk the dysfunctional service was posing to patients, Mr Hill said.

"Although SDHB organised an external review ... that did not occur before the situation had become critical.''

Biopsies could take six months or more from when they were requested, and prostate cancer patients were obliged to wait up to 12 months for their operations.

The commissioner highlighted four of the 38 complaints, two patients believing their cancers would not have spread had they been treated earlier.

"The Southern District Health Board failed to ensure that a system was in place that effectively managed patients waiting for urology services,'' Mr Hill said.

"Clinicians and members of the public came to expect delays, and delays became normalised.''

The board failed to create an accountable, responsible and constructive system to deliver urology services effectively.

"SDHB's inadequate response failed each of the patients discussed in this report.''

While scathing about the historical deficiencies in the service, the commissioner did praise the SDHB for its eventual response to a situation he said had escalated to a crisis.

"I commend the chief executive and his team for the work that has been undertaken, in particular over the last two years,'' Mr Hill said.

"The 'mega-clinic' weekends are an excellent example of the clinical support and organisational commitment that has been utilised to address the challenges faced by the urology service.''

Online information at the time was inadequate; one patient was subject to a "verbal counter-assault'' and hung up on, while another was given a chance to meet and discuss her case with a manager who no longer worked for the service.

"The learnings from this case - the need for clear processes, effective communication, collaborative working, and collective ownership of the challenges - are self-evident,'' Mr Hill said.

SDHB chief executive Chris Fleming said the board apologised unreservedly for the failings which led to unacceptable care being provided to urology patients.

"The urology service has undergone significant change,'' he said.

"We still have work to do, and we are aware that all of the process improvements need to be continually monitored and evaluated.

"However, we acknowledge the hard work of our clinical and management staff who have worked together to make significant fundamental changes to the service, in the interests of their patients, and in recognition of those individuals who did not receive the care from us that they were entitled to.''

The SDHB now had just five patients who had waited longer than Ministry of Health guidelines for their first specialist appointment. That figure was 60 in August 2017, Mr Fleming said.

"We currently have approximately 100 patients who have waited longer than ministry guidelines for subsequent treatment, and expect to have cleared this within the next six months, with the additional urologist who has now joined our team.''

So what I'm seeing here is a failure to provide the very service they are meant to, and I guess people are dying as a result