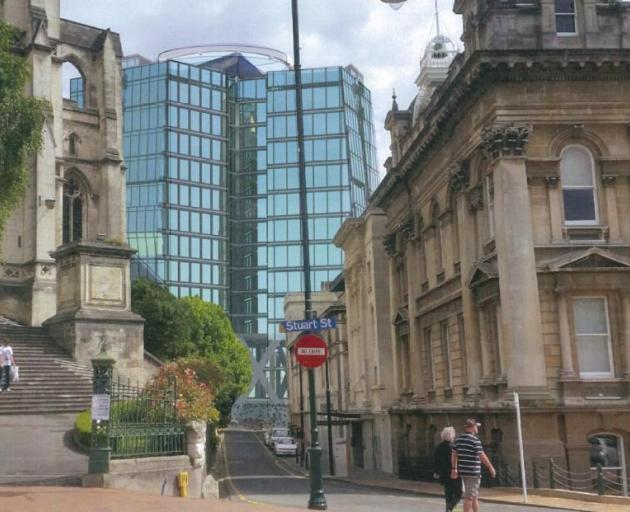 St Paul's Cathedral and the Municipal Chambers frame an image of the proposed hotel in Moray Pl, Dunedin. Photo: supplied

Dunedin's latest five-star hotel bid will "not be viable'' if the developer is forced to reduce the building's height, it has been claimed.

But the man behind the project, Tekapo businessman Anthony Tosswill, remains confident the hearings panel set to decide the project's fate can yet be swayed by the hotel's benefits.

The comments came from Phil Page, the lawyer acting for Mr Tosswill, days after the public release of an independent planner's report running the ruler over the hotel proposal.

The report by Nigel Bryce concluded consent be declined unless Mr Tosswill agreed to a "substantial reduction'' in the building's height, by four storeys, to bring it down from 60m to 45.5m.

Mr Bryce had concluded the building's size would otherwise "visually dominate'' its surroundings, including noted heritage buildings, and cast a mid-winter shadow over the Octagon.

Yesterday, Mr Page, in a statement on behalf of Mr Tosswill, said the report was "right to acknowledge the implications for the project's viability'' if four storeys were removed''.

The hotel's "tall, slender built form'' minimised the impact on those living closest to the hotel project site, and, having settled on that approach, "removing floors off the top will not be viable'', he said.

Despite that, the developer was "pleased'' the report viewed the site as "ideal for a 5-star hotel'', and also acknowledged the significant contribution it would make to the city's vibrancy, Mr Page said.

The shadow cast over the Octagon by the hotel was "the consequence of adopting a tall, elegant form that will contribute positively to the cityscape as opposed to the regular block form of many of Dunedin's larger buildings'', Mr Page said.

The "potential shading effect'' was acknowledged, but Mr Page was confident the hotel's benefits "will far outweigh'' those concerns.

Mr Tosswill's hotel and apartment tower project has attracted 265 submissions, plus six late submissions - 206 opposed to it, 58 in support and seven neutral.

Mr Bryce's report described the hotel as a 17-storey or 16-level building, including three below-ground levels, providing 210 hotel rooms, 64 apartments, four penthouse suites and a range of other facilities.

Reducing the tower's height by four levels would lower its overall height to nine storeys above ground, and three further levels below ground, the report said.

It identified shading as a "key concern'' for submitters, as the building would block sun from reaching the Regent Theatre and surrounds from 3pm at winter solstice.

"At this time of year, the proposal will effectively remove all remaining access to sunlight received over [the] southern end of the western side of the Octagon.''

The hearing to decide the project's fate - before a panel of independent commissioners - begins on July 31 and is set to run for at least five days.

Haven't we seen Mr. Phil Page before somewhere? Spending all day trying to twist community's rules for a developer. What sort of life is that?