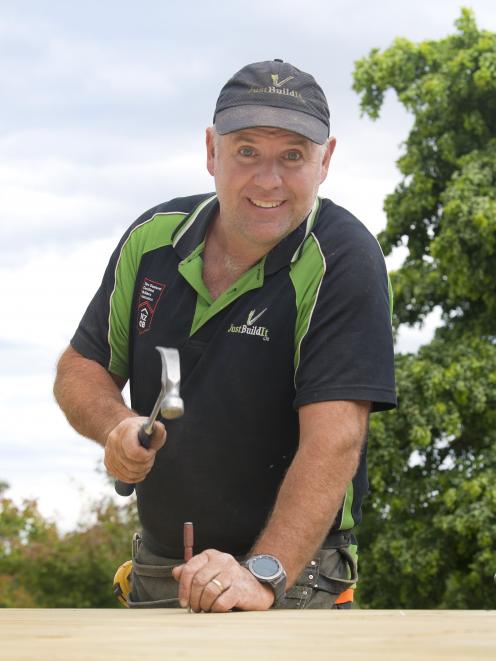 Just Build It owner Sacha Gray says rule changes could make a positive difference in enabling more houses to be built in Dunedin. PHOTO: CHRISTINE O’CONNOR
Property developers say changing planning rules so more than 2500 homes can be built in Dunedin is desperately needed, but they sense a gap between the vision and reality.

"I’ll believe it when I see it," Peatspade director Lloyd Morshuis said.

Allan Dippie, who was behind the Heathfield subdivision at Mosgiel, suspected Dunedin City Council staff might be dreaming if they believed planned adjustments to rules would fix a shortage in housing stock and create the right mix of homes.

"There needs to be a proper land identification study — a look at where the city wants to expand," he said.

Dunedin city councillors will decide next week whether the proposed changes, which would alter the second-generation district plan, should be put forward for public consultation.

They are expected to include new areas for building and to make it easier to increase housing density in residential areas.

Council modelling suggests about 600 homes would result from greenfields development.

But Mr Dippie said demonstrating there was capacity for more housing was not the same as showing such development was feasible or likely.

Land supply was constrained, and many people wanted to build homes with three or four bedrooms and a double garage and retain a spacious section, he said.

Constrained supply had forced up house prices and that was frustrating for anyone trying to get into the housing market.

Council city development manager Anna Johnson said this week creating conditions where 2500 new homes could be built would be in addition to the 3400 the district plan was expected to cater for in the next 10 years.

The feasibility model encompassed plan rules, economic feasibility and landowner intentions, if they were known, she said.

Just Build It owner and New Zealand Certified Builders Otago president Sacha Gray said it was hard to get projects moving in Dunedin and he welcomed the planned changes.

The test, however, would be when people tried to proceed with projects.

"Unless large amounts are released for greenfields development, I don’t think it will work.

"Developers are more than happy to do more development, but the system has held them up."

His development in Dalziel Rd, Halfway Bush, was held up for several years, he said.

The plan was for 110 sections, but he had to proceed incrementally and ended up selling 10 properties, well short of the subdivision’s potential, he said.

Mr Richardson said rezoning was subject to appeal, so genuine progress could be years away.

"We’re not talking about a quick fix."

This council is making our housing crisis worse. They're making family debt worse too, with increased rates rises and the stranglehold on land.

Who wins? The banks and large landlords, plus a spattering of speculators and land bankers.

Here's an idea.... How's about the DCC free up ALL land for development, and stop beggaring Dunedinites with atrocious policies!