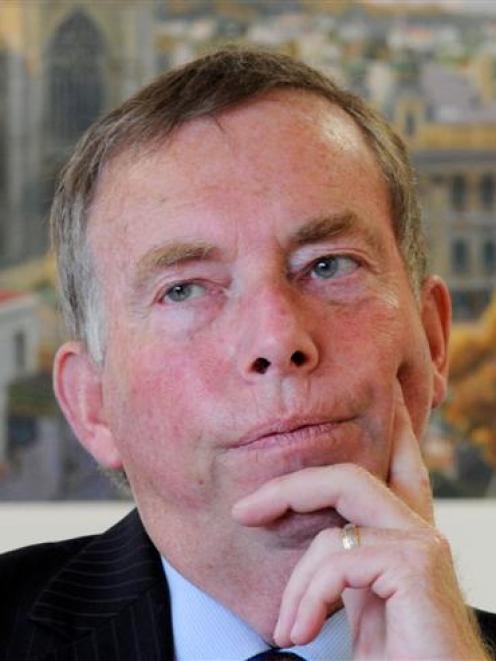 Paul Hudson announces DCHL's net profit of almost $19 million in Dunedin yesterday. Photo by Gerard O'Brien.
A healthy profit and a multimillion-dollar dividend from the Dunedin City Council's group of companies does not appear to have saved board chairman Paul Hudson's neck.

Mayor Dave Cull yesterday said that despite a healthy result, a report had recommended councillors should not be directors on the company, and "the council has accepted the recommendation".

"The result does not change the identified difficulties in governance and communication."

Dunedin City Holdings Ltd (DCHL), the parent company of the council group, has returned a net profit of almost $19 million.

And Mr Hudson, who insists on being referred to as Mr in his role as chairman of DCHL to differentiate from his role as a councillor, yesterday faced the media to release the companies' annual report.

Mr Hudson has experinced some severe criticism recently, since it was revealed late in July an annual $8 million of dividends requested from the companies would not be forthcoming.

Although he spoke to the media early in the debate, he has not responded to media questions on the issue since.

A report released in August from independent reviewer Warren Larsen said there was a high level of dysfunction in the organisation, and financial problems with the potential to become serious.

In the past five years, the DCHL group had paid $106.3 million in cash and dividends to the council.

"To put that into topical perspective, that's more than the council's expected contribution to building the Forsyth Barr Stadium," the report said.

Mr Hudson, at first at least, batted away questions about the issues behind the report.

"I couldn't possibly comment," he said in response to a question about his treatment.

"It would not be appropriate for me to comment on the mayor's views," he said when asked about the council's reaction to the reduced dividend.

But he warmed to his task, saying he felt "absolutely blindsided" and "disappointed" by the criticism he had received.

It was "inappropriate for me to comment" on the reasons behind the criticism, but asked if it was political, he said, "I believe so."

There was a need for "more and more" money for capital expenditure for lines company Aurora, and it would have been irresponsible for the holding company to maintain a high level of dividends to the council.

"No other company is asked to commit to something for 20 year. It's most unusual."

On the shortfall in dividends, he said the company had "communicated that to the council; unfortunately those words were not listened to".

On the Larsen report, he said he had been excluded from council discussions, and would not comment on his own, or the board's view of it.

But Mr Cull had a document with the board's response to the report, and it was up to him to release that information.

"The council has chosen not to release that."

Mr Hudson also hit out at the way the matter had been handled by Mr Cull.

There was "no crisis" - instead, the mayor had released information without coming to DCHL to work out what to do.

Mr Hudson said he never considered resigning, when the directors, who were paid considerably less than they would get in the private sector, had done a good job.

"To resign would have shown a lack of confidence."

On October 31 a general meeting will deal with the election of directors, in particular the one-third of directors who must retire each year, and Mr Cull has made clear he wants changes in the organisation.

Mr Hudson said he had "no idea" what might happen at that meeting, but "I'm not up for re-election".

Mr Cull said the results were "a surprise", but that only backed up Mr Larsen's comments about the communication problems.

On the board's response to the report, Mr Cull said that was "his document, he can release it".