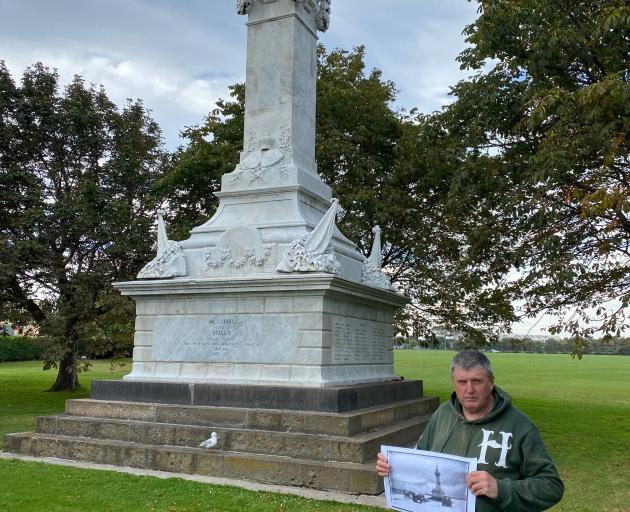 Similar trophy guns were also displayed at Queens Gardens and the Dunedin Botanic Garden until public opinion shifted in the 1930s and they were removed.

Some were taken to scrap yards but, given the massive weight of many of the gun barrels, others were simply buried.

"Our research has shown that there were three German field pieces at The Oval — two small artillery pieces and one large one," Mr Trevathan said.

He has a copy of a 1920s photograph showing the three guns standing near the Boer War memorial.

"We believe they are probably buried here at the Oval quite near to where they were standing — there are even some likely looking hollows in the grass," he said.

The Otago Military Historical Group was hoping to find someone in the local community who knew the story of what happened to the gun barrels.

"If they are still here, then we can start doing some work towards finding them," Mr Trevathan said.

"And if we can find them, we would hopefully be able to dig them up and restore them."

A pair of giant 64-pounder World War 1 gun barrels were unearthed at Queens Gardens about 10 years ago by the Otago branch of the NZ Antique Arms Association.

After careful treatment and restoration, they are now held at the Port Chalmers Maritime Museum.

The Otago Military Historical Group, which operates in association with the New Zealand Remembrance Army, has been busy in recent years restoring the graves of former soldiers in Dunedin’s Northern and Southern Cemeteries.

At present the group is focused on two graves.

The first is of Major the Honourable Sir John Larkins Cheese Richardson (1810-79), formerly of the Bengal Horse Artillery, Superintendent of Otago, Speaker of the Legislative Council of New Zealand and Chancellor of the University of Otago.

The second is of Able Seaman Ian Grant, who served aboard HMS Achilles in World War 2, and was fatally wounded at the Battle of the River Plate in 1939.

The Otago Military Historical Group was also heavily involved in the restoration of the war memorial at Upper Junction, and is researching the historic gun emplacements at the World War 2 encampment at Tomahawk.

"There are so many fascinating historical military sites around Dunedin to be researched," Mr Trevathan said.

"It keeps us very busy."

Anyone with information on the guns at the Oval, or who is interested in the Otago Military Historical Group is welcome to phone Peter Trevathan on 027501-8224.