Images of Chinese settlers on Internet 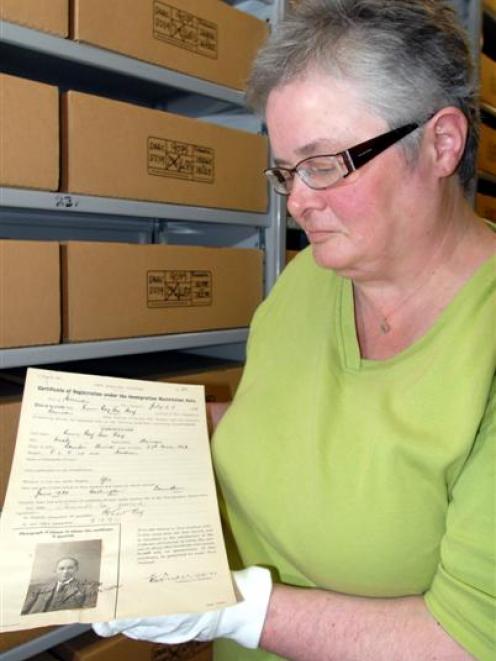 Archives New Zealand archivist Vivienne Cuff with a certificate of registration and photograph of Kum Poy Sew Hoy dating from 1930. Photo by Gregor Richardson.
A series of intriguing portraits of some of Otago's more exotic early settlers have been made accessible to a worldwide audience.

Archives New Zealand has posted online the portraits of more than 40 Chinese men who lived in Otago in the late 19th century and the early part of the 20th century.

The portraits were taken by studio photographers for the men's certificates of registration - official documents predating passports which all New Zealand residents not born in Britain had to obtain from the controller of customs in order to re-enter New Zealand after a period overseas.

The photographs were inspected when the traveller returned to this country and used to ensure the traveller was someone who had already lived here, archivist Vivienne Cuff said yesterday.

Archives New Zealand's Dunedin branch held the 1248 certificates issued by the local controllers of customs between 1881 and the early 1950s, Miss Cuff said.

Most of the Dunedin portraits were of Chinese men who had returned to their birth country temporarily to find brides or to visit family, but there were also portraits of Chinese women and children and of Otago residents born in Lebanon, Greece and Italy.

Last year, it was decided to put a selection of the Chinese portraits online to allow more people to view them.

The portraits were a fascinating glimpse into the past, Miss Cuff said.

"Most people don't even realise these portraits were taken. For some families, a portrait might be one of the few photographs of their relative which exists."

The portraits can be viewed at http://gallery.archives.govt.nz/v/dunedin/Chinese+Portraits/.

Anyone wishing to view the paper files can visit the Archives New Zealand Dunedin office in George St.