Indications suggest lockdown to be extended

By Mike Houlahan
0 Comments
The Alert Level 4 lockdown in the South Island is unlikely to be lifted today, as experts warn the Government needs much more information about the extent of the Auckland outbreak before restrictions are eased.

The Cabinet meets today to decide whether the three-day lockdown period — outside Auckland and Coromandel, which will stay at Level 4 for at least seven days — will be extended beyond 11.59pm tonight.

Prime Minister Jacinda Ardern gave a strong hint yesterday her preference was likely for the whole country to remain at Level 4.

"I would much, much rather that you [the South Island] be included now rather than us be in a situation where we miss something or someone and you end up in a lockdown that could have been prevented. 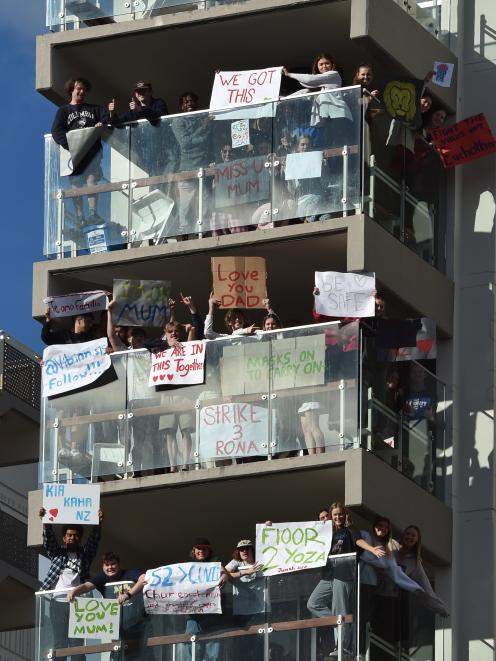 Showing their support for the community from the safety of their balcony are residents of University College in Dunedin yesterday. A University of Otago spokeswoman said the college functioned as one large bubble, with appropriate safety precautions being taken to keep everyone safe. The college usually housed about 530 students, but only 224 are still there. PHOTO: GREGOR RICHARDSON

Yesterday, 11 new cases of Covid-19 in the community were reported, all in Auckland.

Ms Ardern’s caution was endorsed by immunologists and mathematicians, who said too little was known about the current outbreak for the alert level to be changed now.

University of Otago immunologist Prof Michael Baker said moving to Alert Level 4 had been the right thing to do, and that decision had been borne out by the ever-growing list of locations where infectious cases had been.

"It was good to learn today that the length of time that infectious people were in the community was probably not that long, so we aren’t looking at multiple generations of infection ... but we haven’t managed a Delta outbreak before and we only have to look overseas to see how grim that can be.

"I think there will be a real determination to do it once and do it right."

Prof Baker said while giving people 48 hours to travel home posed a risk that infection could spread around the country, people were more likely to comply with lockdown regulations if they were in familiar surroundings.

"That is another reason why we might need an extended lockdown across the rest of the country ... but you will get better compliance with the need to stay at home if people are somewhere where they can comfortably self-quarantine for a period."

University of Canterbury mathematics professor Michael Plank said it could take a week or more for people with the Delta strain of Covid-19 to show symptoms, and that lengthy incubation period suggested a cautious approach would be for the best.

"People who were in Auckland over the weekend or on Monday and who have subsequently travelled home could be in their incubation period and might not necessarily have developed symptoms yet."

It was still early days in the outbreak, and there were still locations of interest being made public by the Ministry of Health, he said.

"It is quite likely that someone from the South Island might have visited those locations, and we know how much people like to move around the country, so we really have to wait and see more results from testing."

Ms Ardern said the Cabinet would weigh up a number of factors, including any positive cases outside Auckland, testing rates elsewhere in the country, and wastewater testing results in making its decision about alert levels.

"Wastewater testing is helpful, but our primary source of information is [those] symptomatic test results."

Director-general of health Ashley Bloomfield said ideally he wanted to see nationwide testing of people with possible Covid-19 symptoms approach 100% to give certainty to any recommendation he gave about changing alert levels.

"We need a high rate of testing right across the country."

Yesterday, Dr Bloomfield gave an extensive rundown of negative wastewater testing results around the country, which included those in Queenstown and Invercargill.

Samples taken in Dunedin on Tuesday were still being

analysed, but previous results had tested negative, a Ministry of Health spokesman said.

On Wednesday, more than 2000 Covid-19 tests were carried out in Otago and Southland and the WellSouth call centre had a 250% increase in calls from people inquiring about testing.

Similar demand was experienced yesterday, and Southern District Health Board medical officer of health Dr Susan Jack urged anyone who had flu-like symptoms to get tested.

The SDHB will today resume Covid-19 vaccination at its two main clinics in Dunedin and Invercargill.

The SDHB is taking bookings for anyone aged 40 or over, or who is in a high-risk category and who has yet to be vaccinated.

"Other sites will be open from tomorrow but some may operate at a reduced capacity or reconfigured service due to Alert Level 4 restrictions and/or swabbing activity," Dr Jack said.