By Hamish MacLean
0 Comments
The locally sourced fennel, lichen, Spanish moss, artichoke, leek and dogwood on display at the Dunedin Public Art Gallery are intended to reflect the city in winter.

In Bloom started in summer in Auckland's Britomart, before moving to an autumnal Christchurch installation, and now Dunedin for the winter.

It is expected to return to Auckland for a spring show. 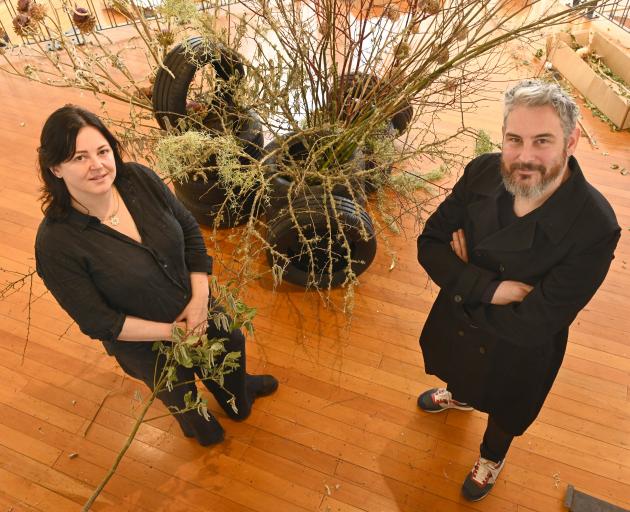 As the artist, he only gave minimal direction and the modern, linear display of dried flowers was up to a florist whom he trusted, he said.

What at first glance might appear to be Bridgestone tyres holding the floral arrangement were Mr Carr’s contribution.

Fascinated by the idea that bronze patina and wax looked remarkably similar to the rubber of a car’s tyre, Mr Carr played with the idea that public sculpture could be ephemeral and permanent at the same time.

The bronze tyres that he created for the piece would easily last 100 years.

But the flowers that complemented his work and the space in which they were installed would change with the seasons.

‘‘The material is honest, but dishonest,’’ he said.

‘‘The caring of it, whether it’s plants that need to be watered, or cut flowers that need to be arranged or changed, that kind of commitment over the 100 years becomes about the institution, or the town. I think that’s a really beautiful thing.’’

In Bloom is on display at the gallery over winter.