By Daisy Hudson
0 Comments
It was loud, it was rowdy and it was surprisingly hard-hitting. Daisy Hudson headed along to the OUSA Politics Week Youth Wing Debate to see New Zealand’s future political leaders in action.

Any political debate that starts with a sculling competition is likely to be memorable.

Throw in a sticky-floored bar, a room full of students and a fraught election campaign, and you’ve got the OUSA Politics Week Youth Wing Debate.

There was certainly rowdiness. An on-stage sculling competition between the representatives, won by Mr McLaren Harris, kicked off the evening.

There was a healthy amount of banter between the audience and those on stage, featuring plenty of zingers and some surprisingly sincere moments in between.

It was a discussion characterised by a level of frankness not always seen in professional politics.

The panel also faced some tough questions, particularly on the records of their respective parties.

As Mr Steele-Macintosh answered a question early on in the evening, an audience member called out "what about sexual harassment?"

That was likely a reference to allegations of sexual harassment and rape culture within Young Act that have emerged this year.

A question likely targeted at the popularity of Prime Minister Jacinda Ardern was also asked — should people vote on policy or personality?

Mr Wairepo’s answer was "both".

"You need to be able to trust the person making those decisions," he said.

The panellists acknowledged there were ways in which their parties had failed younger people.

Starters Bar was packed as people turned out to hear from political youth leaders.

Mr Hardy said mental health was not enough of a priority for National during its time in government.

"Definitely in the last government mental health was something we did not do enough for students on. It’s a big issue in our demographic and things need to change."

"We need to invest as much as we can, both monetary and in each other, to support our young people."

For Mr Wairepo, the scrapped capital gains tax was a missed opportunity. He also wanted to see the Maori seats entrenched.

While there representing their respective parties, there were some moments when they strayed off message.

All candidates said they were leaning towards voting "yes" in the upcoming cannabis referendum, despite National leader Judith Collins saying the entire National Party caucus had decided to vote against the Cannabis Legalisation and Control Bill in the referendum.

Mr Hardy said he believed a National government would ultimately respect the result of the referendum.

"I’d like to see our party honouring it," he said. 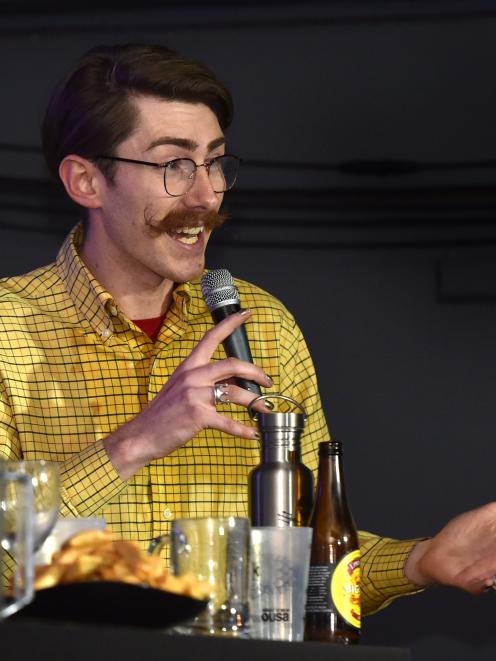 There was little love lost between the Greens and National, both representatives saying a future coalition between the two was unlikely.

Questions about Covid-19 were also prescient, given the news of new community transmission broke just after the event wrapped up.

And while it seemed at odds with the interest shown in the event, the candidates all agreed more needed to be done to tackle voter apathy.

Mr Brazil said the Greens were focused on "building a movement" of people who wanted change.

"It’s about making sure parties represent everyone, and having candidates who are young really helps there."

Mr McLaren Harris said making youth wings attractive was key, but not just for university students who tended to make up most of their ranks.

Getting out into the regions and small towns was also important.

"Their views and their votes matter as well."

Any political debate that starts with a sculling competition is likely to be memorable.