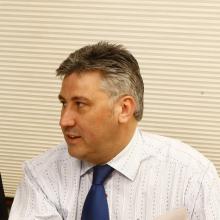 Barry Kloogh
The Serious Fraud Office raid on the premises of financial adviser Barry Kloogh was a total surprise and had devastated the family, his brother Geoff Kloogh says.

The SFO executed search warrants in Dunedin on Thursday, as part of an investigation conducted by it and the Financial Markets Authority.

No charges have been laid against Barry Kloogh, but the FMA has said it was working to secure and preserve client funds.

Geoff Kloogh, who has been part of companies with his brother in the past but now has no business involvement with him, has an office in the same High St complex which houses Barry Kloogh's firm Breathe Financial Planning.

"I turned up on Wednesday morning and wondered why the car park was so full," Geoff Kloogh said.

"I couldn't park the car so when I got in I was going to have a go at someone for parking there, but the place was full of police.

"I was totally gobsmacked."

Geoff Kloogh's business was not part of the SFO investigation, and he was trading as usual he said.

"We are two totally separate businesses.

"I really don't know where this leaves me - I run my own systems and he runs his," he said.

"I would hope it would not [have an impact on his business], but I have had calls from clients today."

"I feel awful about the situation, it's terrible."

The number of people affected by the Breathe Financial Planning situation is unknown, nor has the SFO divulged how much money might be involved.

However, the SFO is able to investigate only allegations of serious or complex fraud.

Companies Office records show Barry Kloogh as a present or past director of 29 entities, and a past or present shareholder in 17.

The SFO has not clarified which of Barry Kloogh's business enterprises are subject to its inquiries.

The raid has left investors nervously waiting for news of their finances and dismayed they had heard nothing from the SFO.

"I don't know what the story is," an investor who had his and his wife's life savings invested with Barry Kloogh said.

"I can't make it out. I've been with him 30 years, call him a friend, and then this happens ... I just need to know more; it's a complete surprise."

Barry Kloogh has been an authorised financial adviser since 1993, and websites associated with some of his firms are listed as also trading in the United States and Britain.

He often ran personal investment seminars, and was known in Dunedin for inviting people to a free dinner in exchange for hearing a pitch regarding his financial services.

One former investor with Barry Kloogh said he ceased dealing with him many years ago, but had been up 60% when he cashed out.

In an old press release, Barry Kloogh claimed to have helped clients shed more than $10million of debt in the previous eight years.