Diary of a not-so-secret royal 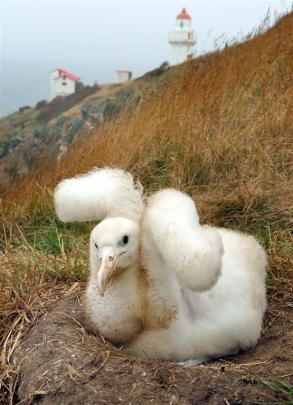 I wish I could fly. Photos by Stephen Jaquiery/Department of Conservation Webcam. 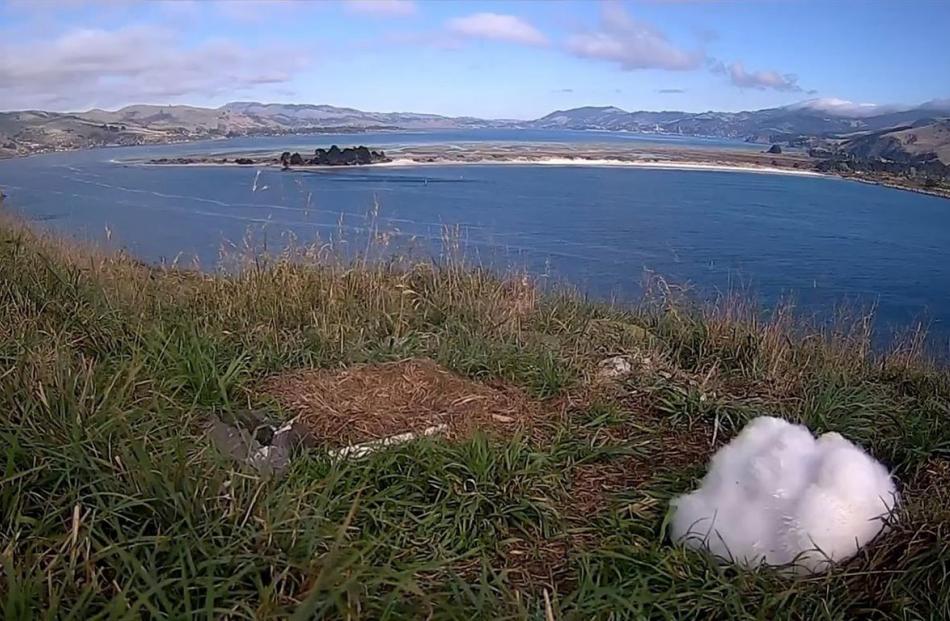 Royal albatross chicks, while having developed a certain degree of cultural capital within the Dunedin environment, have so far been denied a voice. These excerpts from the diary of a 90-day-old chick on Taiaroa Head may explain why.

The world before the first crack of reality is a strange one, let no albatross tell you different. It is not just the issue of being arbitrarily divided into two states of being (white and yolk, I called them), trying to describe the shape in which I was encased was next to impossible.

I toyed with the word ellipse, but was unsure whether it was three-dimensional enough.

I was so annoyed by this conundrum I lashed out in anger one day with a sort of long hardened structure that had developed on a sort of head-like bit.

I kept doing that for six bloody days - that's how long it took me to get out of that stupid egg.

Is this seriously the most sheltered spot the large winged things that appear to have been sitting on me can find for me to live? It's damn windy, there's no shelter from the rain, and just as I'm dozing off in the evening large white tubs full of humans float past and blow their horn.

I suppose an apartment is out of the question?

Have realised what eating involves. The things that have been sitting on me regurgitate what they recently ate and vomit it down my throat.

Actually, the winged things are quite useful for keeping me warm. One of them told me she was my mother.

Mother tells me I am sanfordi X epomophora hybrid of the Diomedeidae family, and that our people come from the Procellariiformes order, along with shearwaters, fulmars, storm petrels, and diving petrels.

Diving petrels my eye! Diving petrels don't have a nearby viewing building where the large-glass-eye people pay money to glory in their excellence like we do.

Diving petrels don't have a 24-hour seven-day-a-week webcam trained on them so people all over the world can stare lovingly at them.

Diving petrels haven't had a song written about them by Lorde, or whatnot.

Mummy said we were royalty.

I had a feeling that might be the case.

She said she and Daddy would stay together for life, and I didn't need to worry about being the child of a divorced bird.

She said other seabirds were not of our moral stature, and that I should not speak to them.

She said they were ‘‘common''.

I like that word - common - I like to form it in my beak and let it float on the wind to Aramoana, then drift up the coast to Karitane.

I turned my beak up at a red-billed gull this afternoon.

He had "Doc'' written on his shirt.

Daddy calls him "the waiter'', and says he is from the top-end haute cuisine outfit Dining on Cliffs.

Funny name - accurate I suppose - but anyway he brought me some fish.

I think they had been frozen.

I plan to complain.

Today the Monarch came by and unloaded another group of people keen to stare at us.

I understand we need to be visible to our subjects, but as a young royal albatross, I can't be all things to all people.

Honestly, sometimes it is just too tiring.

Mummy and Daddy are taking turns, one guarding me, while the other goes to sea to get my food.

I get sick of waiting.

I'm not sure why Dining on Cliffs doesn't do that work for us.

We are royal albatrosses, not penguins.

Sometimes I think penguins get too much publicity.

My impression of them, looking down from the hill as I do, is they are affected, with their put-on walk and those useless wings that don't even work.

The yellow-eyed penguins are the worst, always banging on about being an endangered species, and everyone feels sorry for them.

I've heard huge groups of them hide round the back of the peninsula whenever those idiot humans go to count them.

Seriously, they're taking the piss.

Spent the day in front of the camera again, pulling different poses.

I like to curl in a ball and show viewers my fluffy behind.

They have no idea, as I look mostly like a ball of down, but it amuses me.

Mostly, I'm sick to death of the bloody view from this place.

If I wake up looking down that stupid harbour again I'm going to scream.

Also there's bloody flies down here, and they're getting on my goat.

I watched the older albatrosses flying about, and wish I could just wing it out of this dump.

Great God, this is an awful place!