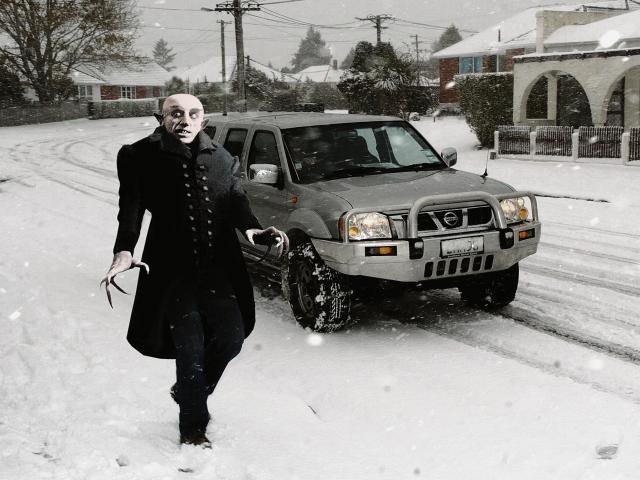 Vampires in the community was written in 2017 and wisely banned from publication and entombed deep within the Allied Press building. Until now.

As Dunedin's freshly elected councils consider what direction to take this fine city, we ask if they have the guts to take on the bold vision outlined by ODT columnist David Loughrey in 2016.

Some people see cancer as a mostly negative thing that should be approached with tears and remonstrations with whatever god one blames. But David Loughrey can see many positives following his diagnosis.

After he developed an unexpected new relationship with cancer* recently, David Loughrey has been stepping carefully through the nomenclature and narratives surrounding that disease. He also...

Barnes Dance crossings were not introduced by former Dunedin mayor Sir Jim Barnes MBE. Despite that, David Loughrey looks at the possible hazards of the dance, and visits Barnes Lookout.

In the wake of a Queen’s Birthday honours season that celebrates the achievements of the excellent  and the wealthy, it is time to consider the successes and failures of the little people,...

A monster turkey landed in Dunedin this week, at the same time as a representative of prominent evil empire the US visited this country. Coincidence? David Loughrey thinks not.

Over a few days recently, David Loughrey took in the unparalleled beauty of the Dunedin he sees when he crests the hill at the intersection of Eglinton Rd, Neidpath Rd and Stafford St on the way to...

The world in 2016 is the sort of place you wouldn't take your mother, a planet riddled with violence and with idiots clearly in the ascendant. But David Loughrey knows of an excellent little city that might have a lot to teach a wretched Earth.

One thing common to all of Dunedin's heritage buildings is their extreme age; some are more than 100 years old. In the final instalment of his series of scholarly articles on how to make the city much, much better, David Loughrey looks at the possibility of replacing them with something more modern(ist).

The personalities and mores of fur seals, a species which has developed a certain degree of cultural capital within the Dunedin environment, has been the subject of little study or publicity. These excerpts from the minutes of a meeting of the Otago Harbour Fur Seals Rotary Club may explain why.

Dunedin was beside itself with excitement on Thursday when the Royals hit town. ODT royal and fashion reporter David Loughrey was there with a sharp eye on what really mattered.

Royal albatross chicks, while having developed a certain degree of cultural capital within the Dunedin environment, have so far been denied a voice. These excerpts from the diary of a 90-day-old chick on Taiaroa Head may explain why.

Hidden within Dunedin city suburbs are little known lesser sub-suburbs hiding in plain sight, areas some have heard of but to which few can give directions. David Loughrey searches for Maryhill and Dalmore, and does his best to understand their souls.

David Loughrey went to university to hear arguments for the existence of God. He found nothing happens without a cause, but the possibilities are disturbingly infinite.

Those once young took to the fields and stadiums of Dunedin this week to compete in the Masters Games. David Loughrey attended two events, and found them ripe with important lessons about life.
Dunedin was thankful for cruise ship passengers this week. They took over the role of hanging around town and walking about slowly while residents went stationery shopping and taught their young about the dangers of flamboyance. David Loughrey investigates.

The end of the year is nigh, Christmas is but days away, and Dunedin needs a list. David Loughrey provides most of a Christmas A to Z.

Its gardens are well kept. It looks down on the city, in a literal sense at least. It knows how to keep its picket fences painted. It is the suburb of Waverley, and suburban tourism reporter David Loughrey found the secret of its success is love.