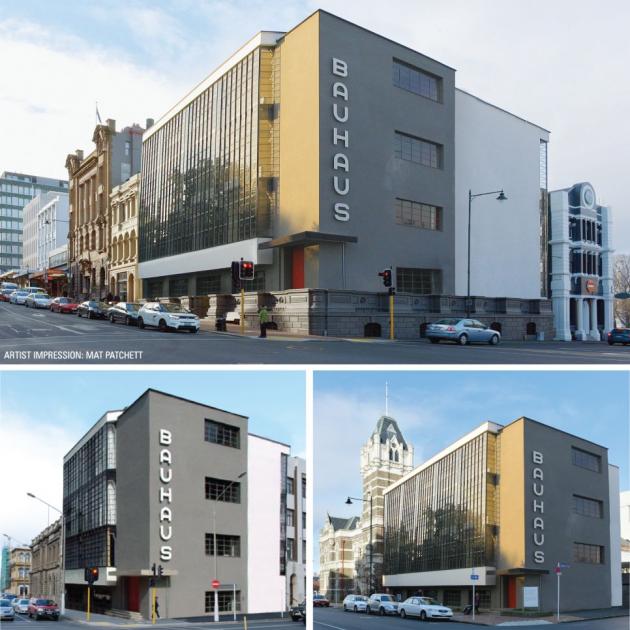 One thing common to all of Dunedin's heritage buildings is their extreme age; some are more than 100 years old. In the final instalment of his series of scholarly articles on how to make the city much, much better, David Loughrey looks at the possibility of replacing them with something more modern(ist).

To truly turn a city like Dunedin from a shivering outpost stuck in frozen clay clinging forlornly to the side of an unforgiving hill into a settlement of beauty and joy floating in a golden pond of enlightenment is a big task.

In the past few weeks we have posited the kind of ideas that would bring about the sort of paradigm shift that would be needed to bring real change to our city.

Those have included recreating the Colossus of Rhodes at Port Chalmers, building a second stadium at Carisbrook, adding a ninth side to the Octagon, and replacing our tired Scottish heritage with something more exciting; Italian renaissance heritage.

As well, we have suggested relocating the Robbie Burns statue to Balaclava or Clyde Hill or Dalmore or some-such, mostly just to annoy people.

Once those more simple and obvious changes have been undertaken, the way would be cleared for the final glorious act that would forever lift the city to the upper echelons of high worth and high status cities: replacing our heritage architecture with exact copies of the Dessau Bauhaus building.

The Bauhaus was the most influential modernist art school of the early 20th century, and its exploration of art's relationship to society, and to technology, has had an impact that has lasted to this day.

It closed in 1933 under pressure from the Nazi regime, which was implacably opposed to all good things.

The Bauhaus movement, though, left many fabulous designs and one of those was the 1926 Dessau Bauhaus building itself.

Gropius designed the building with a glass curtain wall - a feature that would become a staple of modernist architecture - suspended in front of a load-bearing framework that openly showed its constructive elements.

He amplified the corners of the cubic body of the building, allowed the glass surface to overlap the edges to create an impression of lightness.

The different wings were arranged asymmetrically, meaning an observer must move around the whole building to appreciate its overall design.

It's a bit like Dunedin's Dental School, but older and more modern at the same time.

Think about that for a minute.

Using ratepayer money, or by raising debt if that runs out, the Dunedin City Council could get actively involved in this idea, first by changing resource consent rules and ignoring Heritage New Zealand concerns, and second by demolishing whole streetscapes of heritage architecture using big trucks and diggers and cranes and whatnot.

Once those buildings are out of the way, the land could be used to build perfect facsimiles of the Bauhaus building, sometimes standing on their own, sometimes built end to end so the city could glorify in whole avenues of Bauhaus buildings drifting off into an endless perspective of elegant, functionalist asymmetrical modernism where grand designs rejuvenate our very souls.

There are lots of benefits.

They include jobs for tradespeople and builders, and other benefits too complex to explain here.

There's heaps of them, though.

I know - we could move the Robbie Burns statue.

The installation of hundreds of Bauhaus buildings in Dunedin would bring front and centre the basic tenets of modernism, including its disdain for needless decoration.

This might leave the city's street art in something of a parlous state, once residents begin marching to the tune of the purity of unadorned concrete, steel and glass.

Perhaps the recent proliferation of street art could be modified to include the more basic geometric shapes favoured by the Bauhaus school, or even painted over completely.

The ball is now firmly in the council's court - it is up to the city's leaders to step up and put these ideas into action.

We can only hope they have the intelligence, and the guts, to put these ideas into action.