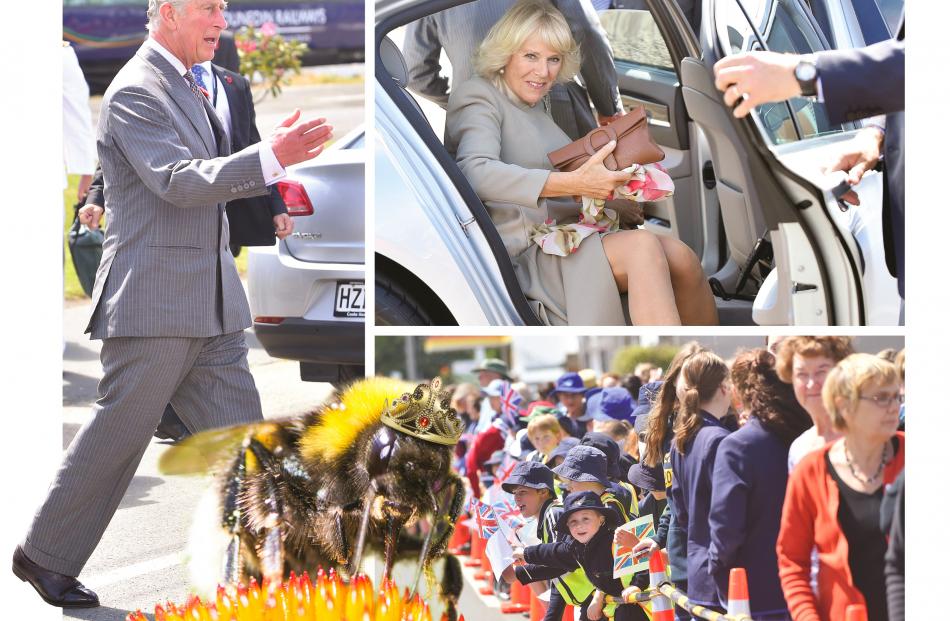 Prince Charles and Camilla, the Duchess of Cornwall, are greeted at Mosgiel on Thursday. The visit created quite a buzz in more ways than one. Image by Mat Patchett.

Dunedin was beside itself with excitement on Thursday when the Royals hit town. ODT royal and fashion reporter David Loughrey was there with a sharp eye on what really mattered.

I was wearing my black suit, with black shirt, tie and display handkerchief, black brogues and black wool socks with a black pattern on them.

I was neat, clean, shaved and sober, and I didn't care who knew it.

I was everything a royal reporter should be.

It was morning on the day of the visit of Prince Charles and his stylish consort Camilla, aka the Duchess of Cornwall.

I stopped at a local dairy for some almonds.

The girl behind the counter was 20 or so, small and delicately put together, with a durable air.

She looked sensational in a bespoke full-length grey silk chiffon gown with crystal embellished belt, which she accessorised with a silver clutch.*

A man entered the shop.

He was wearing a light blue open-necked shirt with a dark blue strip over the button holes, a bespoke herringbone jacket, dark blue pants, solid shoes of an oaken hue, and a thick black leather belt from Macy's in New York.

He was carrying a Union Jack flag and bought a newspaper and a packet of chocolate biscuits.

The town was abuzz.

The Royals were coming.

The media were told to gather at the Toitu Otago Settlers Museum for the Royal couple's arrival.

Journalists wishing to cover royal engagements are expected to comply with a dress code out of respect for the guests of the Queen, or any other member of the Royal Family.

The official website of the British monarchy prescribes clothing for journalists covering royal engagements as: ''smart attire for men, including the wearing of a jacket and tie, and for women a trouser or skirt suit''.

''Those wearing jeans or trainers will not be admitted and casually dressed members of the media will be turned away.

''This also applies to technicians.''

I stopped at a service station to fill the petrol tank on the way to the office.

A mechanic came over to check the oil.

He glowed in a flowing scarlet frock, high heels and diamond tiara.

''You've got some rust in your cooling system,'' he said.

''That'll get worse before it gets better.''

At work the pressure was on.

As soon as the Royal couple got off the plane at Dunedin Airport, the regional chief reporter demanded a full description of what they wore.

The regional chief was wearing diamond earrings and a pearl necklace, jodhpurs, and a tweed jacket.

She had an outdoorsy look that bordered on unkempt, though the golden, zircon-encrusted crown she wore ensured her a regal aspect.

''Readers have a right to know,'' she yelled.

The media gathered outside the Toitu Otago Settlers Museum to await the Royal couple.

A technician grappled with a camera tripod, attaching wires with gaffer tape and lugging equipment back and forth.

She was wearing a beautifully cut floor-length pale blue and gold coat over a matching chiffon gown, a head-dress of gold-leafed feathers tipped with Swarovski crystals, and flattering, natural-looking cosmetics.

The media representatives stood and waited.

A bee flew past in the direction of the Orokonui Ecosanctuary.

The bee was wearing a black and yellow striped one-piece fur coat, with accessories, a matching proboscis and hairy legs.

But the big moment had come - the Royals had arrived.

The prince was wearing a grey double-breasted suit, white shirt and tie, while the duchess wore an off-white knee-length jacket, complemented by a floral scarf, clutch purse, sparkling brooch and gold bracelet.

The moment was over, and the day was done.

The crowd of thousands drifted away from the Toitu Otago Settlers Museum, describing each others' clothing as they left.

Snippets of conversation could be heard over the roar of the motorcade as the fleet of vehicles headed south: ''a floral print dress and elbow-length gloves'' ...

''an electric blue frock with a cascading ruffle and exposed zipper'' ...

''an upscale town and country look that transcends generations''.

I was wearing my black suit, with black shirt, tie and display handkerchief, black brogues and black wool socks with a black pattern on them.

I was neat, clean, shaved and sober, and I didn't care who knew it.

I was everything a royal reporter should be.

And my job was done.

* This product may contain imaginary events, or traces of imaginary events. It is not recommended for those allergic to fictional situations. The author would like to thank Raymond Chandler for his help with this article.