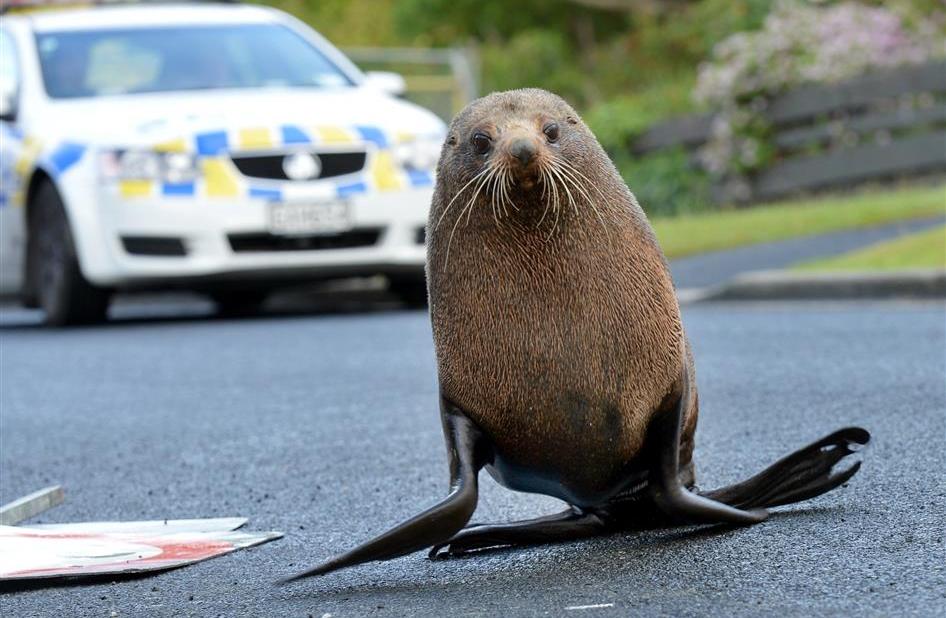 A fur seal being chased by police. Photos by Stephen Jaquiery. 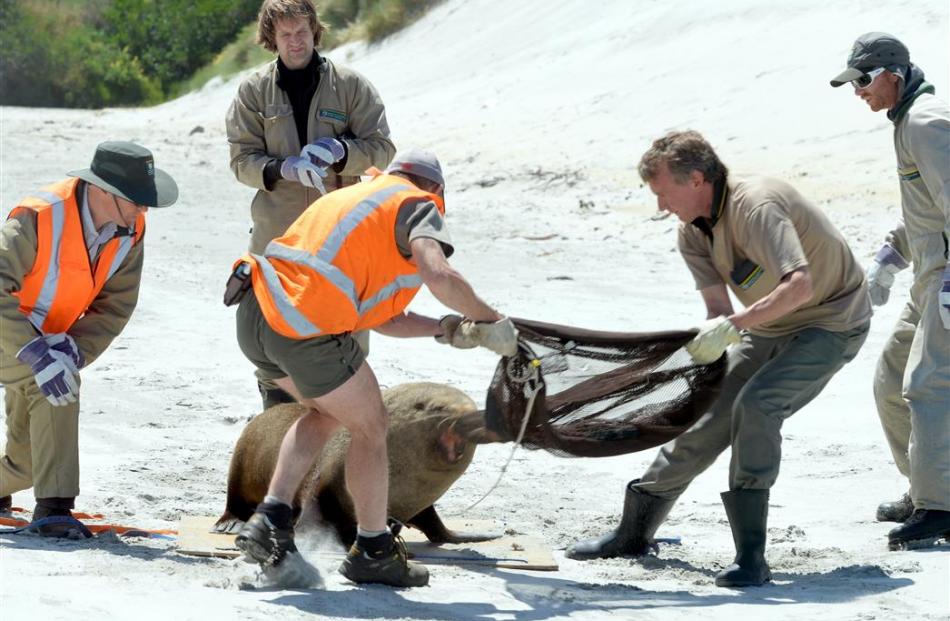 A fur seal involved in a fracas. 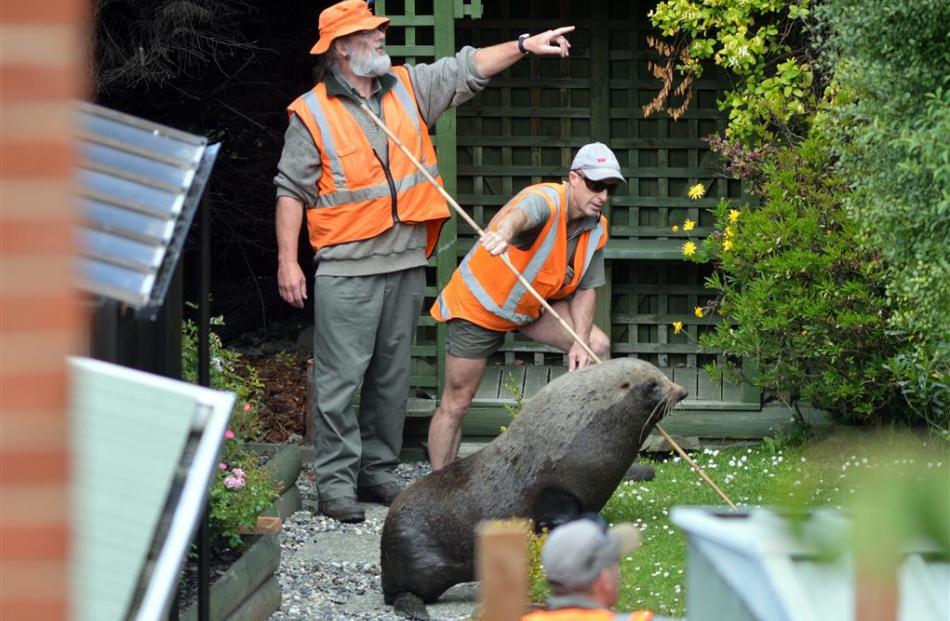 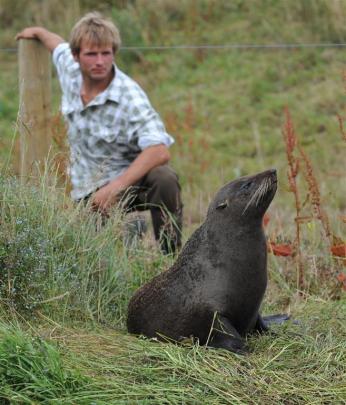 The personalities and mores of fur seals, a species which has developed a certain degree of cultural capital within the Dunedin environment, has been the subject of little study or publicity. These excerpts from the minutes of a meeting of the Otago Harbour Fur Seals Rotary Club may explain why.

The General Secretary passed on concerns from the National Secretariat regarding events in the southern fur seal Rotary region.

The General Secretary said these related to a number of "incidents'' following fundraising events put on by chapters of the club, some of which had ended up in local media reports.

Before elaborating he reminded the meeting of the club's stated purpose of bringing together business and professional fur seals in order to provide humanitarian services and encourage high ethical standards in all fur seal vocations.

The meeting responded with loud barking and some sniggering from the back of the room.

The General Secretary noted an incident after the Andersons Bay chapter's event to raise funds to buy beer and pies for underprivileged children.

He held up a news item that told of a gang of road workers who came across a club member when he emerged from a hedge the following day about 1km from the sea.

Reports had come to him, he said, that the fur seal involved had become incoherently drunk, and had been left in the hedge by others members as part of what he described as a puerile, juvenile joke.

He also admonished the chapter for an incident where a member was found drunk in a paddock on the Taieri after an event to raise money to provide beer and pies for underprivileged farmers.

The General Secretary attempted to give a short speech on the importance of temperance, but was interrupted by hoots and laughter at the back of the room and what sounded like beer bottles being opened, though that was denied by members of the Andersons Bay chapter seated in the back row.

The meeting adjourned after a unanimous vote by all members, apart from the General Secretary, to watch the rugby on television.

The General Secretary reminded the meeting of the club's slogan "service over self''', but he was shouted down, and members moved to the bar area where they had recently installed a 50-inch television.

Following the game, the meeting reconvened, though some members demanded to be able to drink beer during the general business section, and there were numerous delays as fur seals rolled off their seats and lumbered to the toilets and back.

The matter of drinking beer during the meeting was put to a vote, and passed 35 to 1, with the General Secretary voting against.

A member of the Ravensbourne chapter moved the Otago Harbour Fur Seals Rotary Club should be renamed Beer Club, but was told, amidst howls of laughter from fellow members, that was not possible under the constitution.

Two members of the Maia chapter had to be separated after an argument about offside play became physical.

The meeting finally recommenced, and the General Secretary called for items of general business.

Apart from some general barking and hubbub and whatnot, there were no motions put forward.

The General Secretary introduced his own item of business to the agenda, when he moved all fundraising receipts and proof of delivery to underprivileged groups be filed with the secretary by the close of the meeting.

He noted the Pilots Beach chapter had organised a fundraising event to raise money to buy beer and pies for underprivileged Royal Albatross Centre workers, but he had been told confidentially those items never arrived.

The meeting responded with some light barking and embarrassed shuffling of flippers.

There was some dark muttering among the Andersons Bay chapter in the back row regarding possible insurrection, but the threat of violence passed after the General Secretary's motion lapsed for want of the seconder.

The General Secretary, who appeared depressed, called for the meeting to be adjourned, but by that stage members of the Pilots Beach and Aramoana chapters had left for the Careys Bay Hotel, while members of the Andersons Bay chapter were fighting in the car park.

"One profits most who serves best,'' the General Secretary barked at them.

Addendum May 6, 2016
(taken from a letter to the Otago Harbour Fur Seals Rotary Club from the National Secretariat)

The National Secretariat has moved to temporarily rescind the Otago Harbour Fur Seals Rotary Club's membership of the national body following disturbing media reports regarding an incident in the early hours of last Tuesday.

The National Secretariat has noted reports of members, who claimed they were fundraising to provide beer and pies for underprivileged Department of Conservation workers, attacking passers-by who refused to pay.

The future of the Otago Harbour Fur Seals Rotary Club will be discussed at the National Board of Rotary on June 16.

In the meantime all operations of the club are suspended.