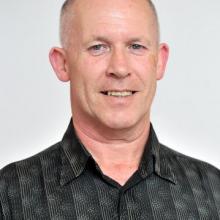 David Loughrey.
A monster turkey landed in Dunedin this week, at the same time as a representative of prominent evil empire the United States of America visited this country. Coincidence? David Loughrey thinks not.

Here is a series of facts:

1. Turkeys don’t come from Turkey at all.

2. They come from America.

3. US Secretary of State Rex Tillerson also comes from America.

4. Mr Tillerson was in New Zealand this week.

5. Dunedin has been in the grip of a monster turkey crisis this week.

6. The monster turkey and Rex Tillerson were both in the news on the same day.

Here is why these facts are related, and what it means for Dunedin: 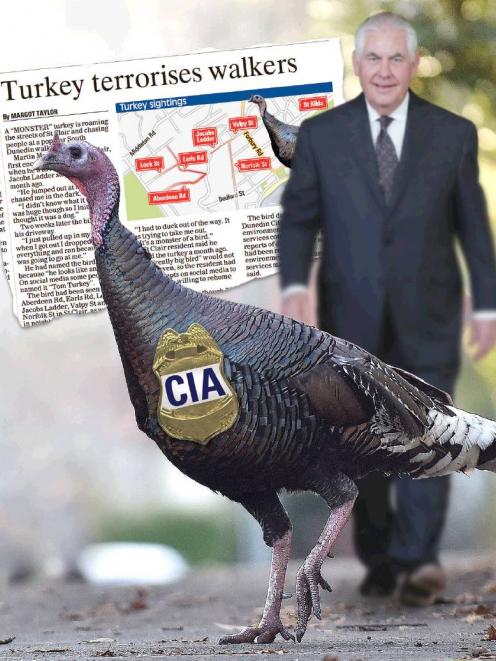 The contemptible president of the United States, Donald Trump, while having a good old laugh with his mostly male, clapping chums on the White House lawn, last week flipped the bird at the rest of the world, and the future of the planet, by withdrawing his darkly troubled country from the Paris climate accord.

That left Secretary of State Rex Tillerson in something of a spot, what with a trip to New Zealand just a few days later to visit Prime Minister Bill English and the fully expected reaction to his visit by the average person in the street  — a raised middle finger to his motorcade.

But the United States is nothing if not a capable country with an efficient Secret Service and a Central Intelligence Agency trained to deal with such a situation.

And it is quite possible the thought of impending bird-flipping and the general idea of turkeys were the inspiration for the solution that was eventually devised.

Another inspiration could be the tradition at the White House where presidents spare the life of the turkey presented to them every Thanksgiving by the National Turkey Federation, an act also known as "pardoning" the turkey.

What we do know, or can be pretty certain about at the very least, is it was no coincidence Dunedin’s monster turkey turned up, publicly at least, on the very same day as Mr Tillerson.

The news broke in Dunedin midweek: a  monster turkey was roaming the streets of St Clair and chasing people at a popular South Dunedin walking spot.

A local man was taking on the fearsomely steep Jacob’s Ladder when the monster turkey jumped out and chased him in the dark.

The turkey was so huge, the man said, he initially thought it was a dog.But the turkey didn’t limit its reign of terror to the steps  connecting Valpy St and Ravenswood Rd.

It was also seen in Aberdeen Rd, Earls Rd, Lock St and Norfolk St in St Clair, as well as roaming ominously in neighbouring St Kilda.

It even had the temerity to chase publicly elected city councillor Conrad Stedman.

So it was clearly trained.The turkey was trained because it was the solution dreamed up by the  Central Intelligence Agency.

Inspired as it was by flipping the bird and sparing the turkey, it  quite likely sent one of the spared turkeys to Dunedin to create the most deviously brilliant political diversion ever dreamed up in the shadowy underworld of the intelligence community.

The idea of intelligence, in a spying sense at least, was at the heart of the ruse.

Such services the world over plant their spies to gather intelligence about communities, and the ones in Dunedin had clearly done their homework.

They knew our city was packed with influencers, those, like our academics, who lead the public in their thinking.

They had done their research and knew residents were mad for stories about animals.

They knew Dunedin people loved stories about the naming of albatross chicks.

They knew most of our work time was spent watching an online albatross cam.

They knew we loved stories about yellow-eyed penguins who have been bitten by barracoutas, then nursed back to health in a penguin hospital by trained penguin veterinarians.

They knew we loved stories about fur seals who took to napping on Andersons Bay Rd, and they knew we gave them names like Dale and erected crosses and left flowers when they had unfortunate interactions with trains.

They knew all of that, and they also knew if they airlifted one of their carefully bred and highly trained turkeys to chase runners and city councillors across our suburbs, that story would trump all other media stories on the day, and few would notice the visit of the former Exxon Mobil chief executive to our small and decent country.

And they were right.

Yes, the good people of Wellington flipped him another sort of bird, and protesters protested, but the trip came and went and was only a minor blip in the general noise of the day.

The figures are commercially sensitive, but I can tell you the story of the itinerant turkey trounced the Tillerson visit by many thousands when it came to online hits in the media.

And if you live on the flat and like to leave your doors unlocked at night because you imagine we live in one of the world’s safer place, think again.

Because that turkey will be a specimen of peak physical fitness trained to the highest levels; it will know  tai chi,  jiu jitsu and every brutal killing method in between.

And it’s on the loose.

Think about that as you walk home in the dark in St Clair these long, cold winter evenings.

We've got lots of agents on it

Not those Turkeys! A turkey turkey. It's Spring here, Winter there. The turkey, thinking it's breeding season, will go gobble gooble and chase them in annoyance. In the confusion, our man will be overlooked.