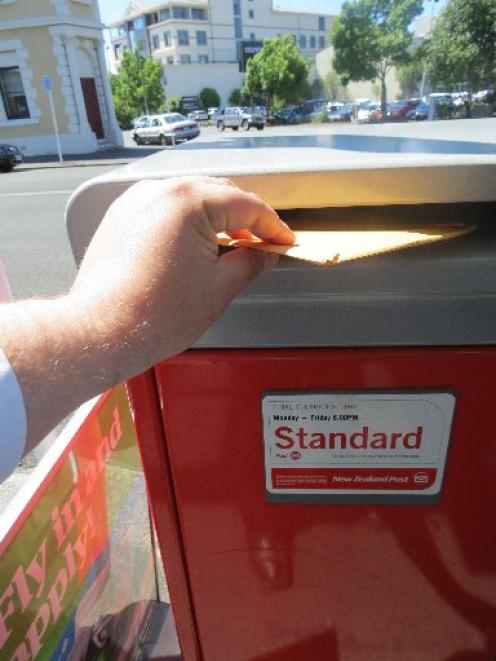 The planned reduction in New Zealand Post delivery days could delay Dunedin home-care workers' rosters and time sheets. Photo by Jonathan Chilton-Towle.
With cuts to mail delivery days looming, there are concerns Dunedin home-care workers who rely on the post to send their time sheets might get paid late. Jonathan Chilton-Towle discusses the issue with unions and a major home-care industry employer.

Changes to mail delivery days could hit Dunedin home-care workers in the pocket.

The reduction to three deliveries per week could mean care workers - along with thousands of others around the country - don't get paid on time. New Zealand Post recently announced it would reduce urban deliveries to not less than three days a week, starting in 2015.

The Star has learned the cut may hit home-care workers, who care for sick and elderly people in their own homes, as many of them rely on the post to send their time sheets and receive rosters.

Service and Food Workers Union Nga Ringa Tota (SFWU) home-support advocate Sam Jones said organising rosters and time sheets was already a huge juggle for home-support companies and the three-day delivery would be a massive barrier to both processes.

''We will be doing whatever we can to work with employers to make sure these people get paid,'' he said.

Home-support workers were already paid around the minimum wage and many worked fewer than 15 hours per week, he said.

Being paid late one week could mean not having enough money for petrol to get to work the next week, he said.

However, few workers had fax machines and many could not afford computers with internet access.

Access Homehealth is one of the largest employers of home-care workers in the country, employing 350 carers in the Southern Region and about 4000 nationwide.

Chief executive Graeme Titcombe said the three-day delivery could potentially have some impact on workers.

However, if there was a general slowdown of services, this could potentially slow payrolls, too, he said.

''People finish their rosters on Sunday and they need to get paid on Thursday,'' he said.

Roster delivery could be affected and the company would be adjusting sending times to compensate, he said.

Using electronic means or the phone to send rosters was something to be considered.

A spokeswoman for the New Zealand Public Service Association (PSA), the other union representing home-care workers, said the three-day delivery issue had not been raised by any of its members.

Most PSA members were dropping their time sheets into their workplaces by hand, she said.

According to NZ Post, New Zealanders now post 265 million fewer items per year than they did 10 years ago, a drop of 24%.

Total mail volumes are forecast to fall a further 25% within the next five years.