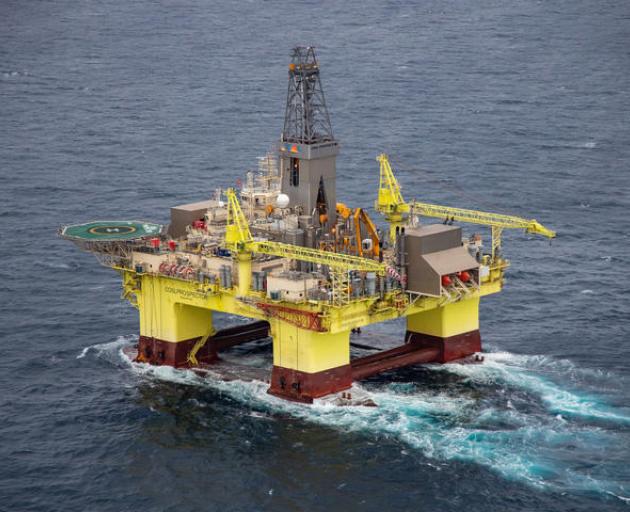 COSL Prospector, used to test drill wells for OMV earlier this year. PHOTO: SUPPLIED
The cancellation of a major gas and oil exploration programme off the Otago coast has been greeted with resignation and joy.

Austrian oil giant OMV, which had a permit to explore the Great South Basin for oil and gas but failed to find anything when it dropped test wells earlier this year, this week announced it would no longer search for gas and oil in the area.

Dunedin city councillor Andrew Whiley said he was not surprised but was disappointed at the news, reported by BusinessDesk yesterday.

BusinessDesk reported OMV and its partners, Beach Energy and Mitsui & Co, had surrendered two major offshore permits, including its permit in the 16,715sqkm Great South Basin.

It meant New Zealand would be left with about 36,000sqkm of exploration areas, about a third of the size it was before the Government declared an end to offshore exploration permits in April 2018.

An OMV spokesman told BusinessDesk the decision to surrender the permits followed a review of its international portfolio which found the East Coast permit was no longer a strategic fit and any discovery there would have been a challenge to develop.

That reflected the result of its unsuccessful drill of the Tawhaki-1 well in the Great South Basin off the Otago coast earlier this year.

OMV was awarded its 15-year permit in 2014, BusinessDesk reported.

Previously, there had been excitement from some that oil and gas drilling off Otago could bring economic gains.

Mr Whiley said in the quest to go carbon-neutral, the opportunity off Dunedin’s coast for a major gas find, which he believed would have great benefits both locally and nationally, was being missed.

"They [OMV] do believe there was a very strong find out there, and Government permitting, that the country will prosper from a rich resource off our coast."

Mr Whiley understood the commitment to drill further would have been "quite intensive" for the company.

There were other areas in the world where governments were "more supportive" and that was where OMV would likely put its energy, Mr Whiley said.

His disappointment was not shared by Ms Penwarden.

She said Oil Free Otago was pleased OMV had surrendered its permits.

"It is really good news that they are doing the right thing and have dropped the idea of drilling in our beautiful, pristine, Southern Ocean.

While New Zealand Oil and Gas continued to drill in the area, she hoped there would be a ripple effect.

The Southern Ocean was remote and dangerous and drilling companies tended to share rigs and information, she said.

Without that support, she believed it could be difficult for the last company standing in an area to continue.

"I think New Zealand has the opportunity to show the world where we could go before it is too late."

I find Mr Whiley's comments very disappointing as he clearly continues to promote greed and wealth over the needs of health and well-being of this planet and the life upon it. While an economic balance is of vital importance, the continued investments into fossil fuel extraction and industrial intensive animal agriculture is not only short-sighted but illogical when one looks at the latest scientific evidence.
Unfortunately, it is wealthy people such as Whiley who do most of the polluting and also have the greatest ability to shape economic and environmental policies. Now is the time to put the needs of planet above the greed of the few.

So the people who cry about oil and gas exploration are more than happy to freight oil and gas from the North Island to supply the south island needs. I dont see them pushing for more power generation to compensate. Its a real double standard