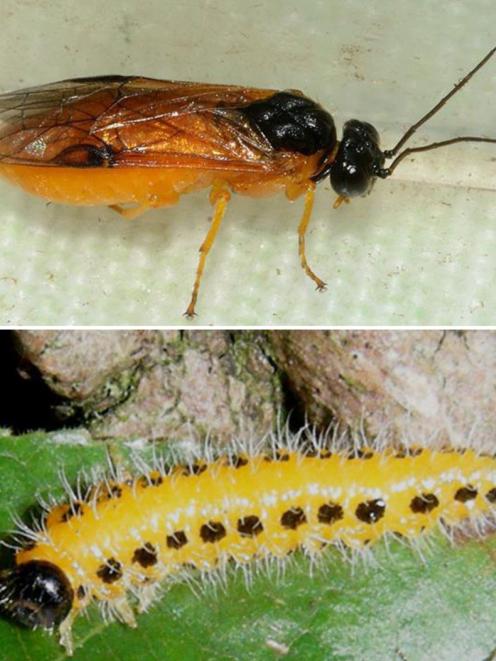 A poplar sawfly (top) and larva, which was recently spotted in Dunedin. PHOTO: MPI
An overseas pest fly has been found in Dunedin.

The Ministry for Primary Industries confirmed yesterday a poplar sawfly larva was detected in Abbotsford.

Biosecurity New Zealand spokesman John Brightwell said it was found in a gypsy moth trap and testing confirmed it was a poplar sawfly on January 31.

The insect was new to New Zealand, he said.

"The poplar sawfly is commonly found in Europe, Asia and North America.''

It was not known to cause significant harm, he said.

"However, some countries where the poplar sawfly is present have reported some defoliation of poplar trees.''

Biosecurity NZ was assessing the potential risk of the creature, he said.

Once that was complete it would discuss the next steps with industry partners.

Anyone who saw the creatures should contact the ministry.

The adult flies are 6-9mm in length, mostly reddish-yellow and have a black head and a partly black thorax.

The larvae can be up to 16mm and are yellow overall, with two lateral rows of black spots and white hairs.

The larvae feed and lie side-by-side on the underside of the leaf.