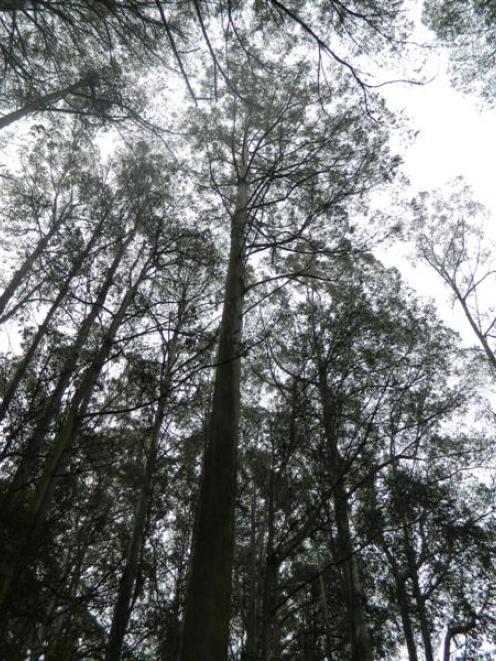 Dunedin has New Zealand's tallest tree. Is it a kauri? Kahikatea? Rimu, even?

No, it is an 80.5m Australian gum, a mountain ash, Eucalyptus regnans, and it is growing in the Orokonui Ecosanctuary. It is the only tree in New Zealand above 80m.

It has long been known that New Zealand's tallest tree was at Orokonui in the plantation of gums near the bottom of the valley. A recent measurement exercise shows that another gum tree in the stand has surpassed the previous record-holder, also a mountain ash.

This species of gum is the second-tallest species in the world behind the coast redwood, Sequoia sempervirens, of California. In its Australian home, in Tasmania and Victoria, the mountain ash has been recorded at heights of around 120m.

New Zealand trees tend to be impressive in girth, rather than height.

New Zealand's largest indigenous tree, the kauri Tane Mahuta, is only 51.2m in height but 13.77m in diameter. The tallest New Zealand tree species is the kahikatea, which reaches 60m.

However, before the last ice age, eucalypts did grow in New Zealand. Fossil eucalypt leaves have turned up in sediments more than 20 million years old in Central Otago.

The original planting of gums in Orokonui Valley was made about 1870, probably as a boundary line. A fire swept through the lower valley in 1907 and the trees seeded prolifically on the cleared and burnt land, covering about 2.4ha. Now this area is a grove of eucalypts in close formation within the lower (north) end of the ecosanctuary.

In 1982, Frank Pepers, then a research technician for the New Zealand Forest Service, was employed by the authors of the book, Great Trees of New Zealand, S.W. Burstall and E.V. Sale, to measure and photograph the notable and historic trees in Otago.

Using a Suunto clinometer, he recognised these trees as being of significant height. The then tallest tree was singled out at 69.1m high and has since been known as the Frank Pepers tree.

In 2004, Mark Roberts, an arborist from Otago Polytechnic, climbed the Frank Pepers tree and measured it at 77m. He did not want to use spikes that could lead to infection of the tree, so, with a Harrison rocket, he had a line fixed and secured over the first branch 41m above ground.

The second branch was reached using a throw ball and the rest climbed normally.

The Rotary Club of Dunedin has generously sponsored the upgrade of the Saddleback Valley Track, which leads visitors to the tree.

The track follows Orokonui Stream, descending steadily and passing through beautiful podocarp forest and regenerating kanuka/broadleaf forest before reaching the extraordinary grove of eucalypts. The walk takes two to three hours return from the visitor centre.

On Saturday, March 17, to celebrate the completion of the upgrade of this track, Orokonui will run two guided tours, at 11am and 2pm, from the visitor centre to the tallest tree and out through the ecosanctuary's bottom gate, where a bus will pick up people from the Doc car park on Orokonui Rd and return them to the visitor centre.

Alternatively, people can choose to return by walking back up the track.

A free talk on saddlebacks and their transfer into Orokonui by Dr Ian Jamieson and a presentation to the Rotary Club of Dunedin will be held at 1pm.

The cafe will be open.

• Chris Baillie, the general manager of the Orokonui Ecosanctuary, has worked with the project since 2007, when the fence was completed.