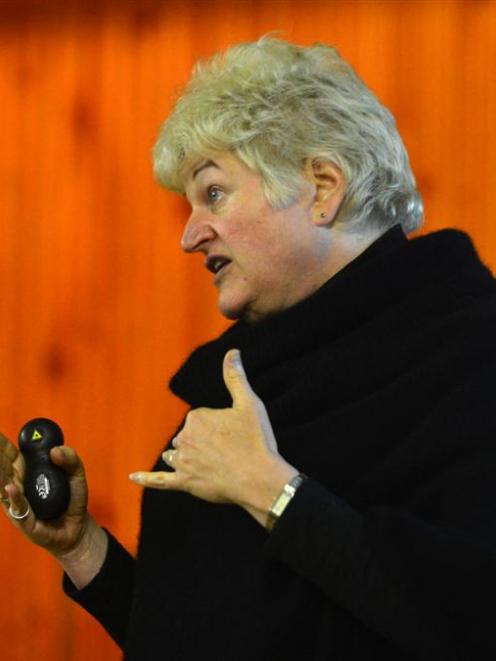 Nicole Foss speaking in Dunedin last night. Photo by Peter McIntosh.
New Zealand needs an economic ''Plan B'', because it was not immune from a looming ''perfect storm'' starting to play out in Europe, Canadian systems analyst Nicole Foss told a group in Pine Hill last night.

Loosening controls on money in the early 1980s led to massive and unproductive asset inflation, and the coming price crash would see a huge correction in property values, she told the meeting organised by the Blueskin Resilient Communities Trust.said.

The crisis was starting to manifest in parts of Europe, with soaring unemployment, an oversupply of housing, and an ''unpayable'' level of debt.

''Austerity'' policies were worsening the European debt crisis by reducing what people spent, which would lead to sovereign debt defaults.

New Zealand's reliance on trade, and its isolation from its trading partners, potentially made it more vulnerable, as other countries would be seeking to trade their way out of trouble.

Mining projects were being cancelled in Australia, which carried a huge housing bubble and would cease functioning as a ''safety valve'' for the New Zealand economy.

However, there was hope for New Zealand if it diversified its production base to look after its population, she said.

China's outlook was poor, because it had hugely ''over-built'' - even whole unoccupied cities - although it had cash reserves to see it through the tough times, she said.

Ms Foss will give a free public talk today, in the University of Otago's Burns 2 Lecture Theatre at 6pm.