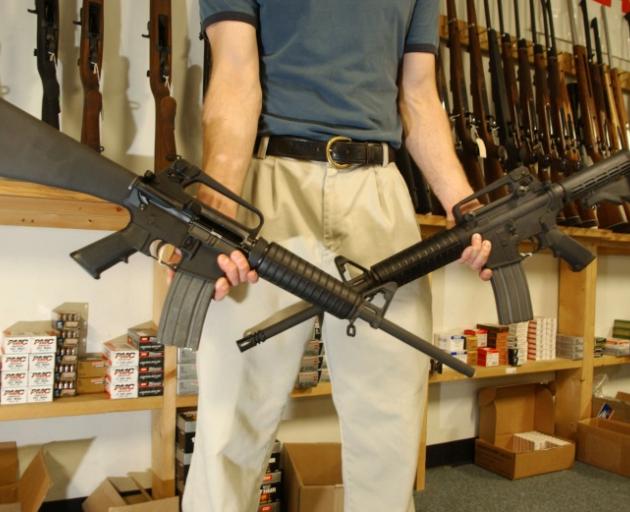 A man displays two AR-15 guns, like those due to be banned under proposed law changes. Photo: Getty Images
A ban on military-style semi-automatics (MSSA) and assault rifles in New Zealand has been met with mixed responses from gun users in Otago.

"Cabinet agreed to overhaul the law when it met on Monday, 72 hours after the horrific terrorism act in Christchurch.

"Related parts used to convert these guns into MSSAs are also being banned, along with all high-capacity magazines."

She said an amnesty would be established for weapons to be handed in, and Cabinet had directed officials to develop a buy-back scheme.

Further details would be announced on the buy-back in due course.

"I strongly believe that the vast majority of legitimate gun owners in New Zealand will understand that these moves are in the national interest, and will take these changes in their stride."

She said action had been taken to identify the weapons legitimately required by farmers, pest controllers and animal welfare providers, and they would be exempt.

Legislation would be introduced when Parliament sits in the first week of April, and she expected the law to be in place by April 11.

The Bill will include "narrow exemptions" for legitimate business use, which would include professional pest control.

Police and the Defence Force will also have exemptions.

"While the legislation is being drafted, I am announcing the Government will take immediate action today to restrict the potential stockpiling of these guns and encourage people to continue to surrender their firearms."

"The actions announced today are the first step of the Government's response.

"We will continue to develop stronger and more effective licensing rules, storage requirements and penalties for not complying with gun regulations."

Central South Island Helicopters Ltd pilot and pest control contractor Gary Oakes, of Oamaru, said he was concerned about whether the changes would affect his pest control business, and was awaiting more detail.

"It's also a shame that normal people can't have a semi-automatic if they want one. It's just the one clown who's gone and ruined it for everyone."

"I think it's a correct and necessary move and I commend the Government for taking swift action."

Mr Dodson featured in the Otago Daily Times earlier this week, calling for the Government to focus on military-style semi-automatics rather than those used by hunters and recreational shooters.

That meant banning assault-style weapons with large capacity magazines and other military-style attachments, which hunters and recreational shooters did not need, and initiating a buy-back scheme.

Yesterday, he said the reforms announced by Prime Minister Jacinda Ardern ticked all those boxes.

While the "devil is always in the detail", and he could not speak for all gun owners, his personal view was most shooters would support the changes.

"I'm sure there will be some users of these weapons who will be disappointed, but they will be very much in the minority.

"It won't be unanimous, but I think the majority will accept that change is needed ... most people won't be affected by these changes and public safety will improve.

"It's a good step forward."

To attempt to keep us safe we now MUST register ALL guns, without exception. maybe even fired bullet samples, so any bullets found at a crime scene can be identified quickly and easily.
The next challenge is to make the Dunedin CBD safe for everyone at any time of the day or night ! Come on Mr Mayor let's take Dunedin from the worst city in NZ (from the number of people shot or killed by residents) to the SAFEST city in Australasia! YOU CAN DO IT!