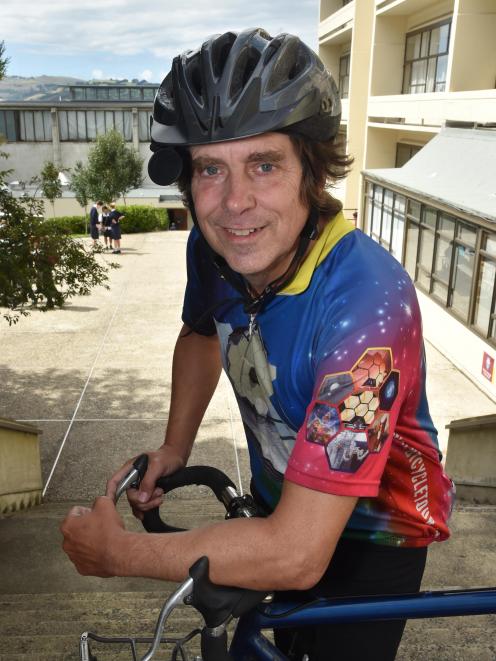 Space: The final frontier. Seeking out that frontier will be the James Webb Space Telescope (JWST), which is designed to search for the most distant events and objects in the universe, understand the formation of stars and planets, and to boldly see what no man has seen before.

And the man helping to make that happen, Scott Acton, was in Dunedin yesterday.

Dr Acton works for Ball Aerospace and Technologies Corp, in Boulder, Colorado, and has had a major hand in building the JWST for Nasa.

It is designed to supplant the Hubble Space Telescope, but is not scheduled for launch until October 2018.

So, in the meantime, Dr Acton is pursuing another of his passions - cycling.

He passed through Dunedin on a round-the-world cycle tour yesterday, and visited pupils at Kavanagh College to spread inspiration for his work.

''On the JWST project, I am the wavefront sensing and controls scientist.

''JWST is going to be really big - much bigger than Hubble. [JWST] is about the size of a tennis court,'' he said.

''It's so big in fact, that it would never fit inside of any launch vehicle.

''As a result, the entire telescope has to fold up. The primary mirror is made up of 18 segments and folds up as well.

''After launch, the telescope unfolds itself. My job (along with the team of people I work with) is to put it back together so that it becomes a telescope.

''This is all done by remote control, of course. Fun, right?''

It will take about a month for the large infrared telescope to completely unfold and reach its final orbiting position.

It is expected to offer unprecedented resolution and sensitivity from long-wavelength (orange-red) visible light, through near-infrared to the mid-infrared.

It will enable a broad range of investigations across the fields of astronomy and cosmology.

One particular goal involves observing some of the most distant events and objects in the universe, such as the formation of the first galaxies.

These types of targets are beyond the reach of present ground and space-based instruments.

Another goal is understanding the formation of stars and planets. This will include direct imaging of exo-planets.

Dr Acton started his world cycle tour in Boulder, Colorado, in April last year, and along the way he has been giving talks and public lectures to publicise the new instrument.

''I've always liked bicycling and bicycle touring. I love astronomy, technology and giving public lectures on these topics. And, of course, I am really excited about JWST.

''About a year ago, I got the idea to combine the two subjects. So, I am taking a year off from my job to travel around the world by bicycle.

''Along the way, I'll stop once or twice a week to give public lectures on this amazing telescope.''

Dr Acton plans to head back to Boulder later this month to begin preparations for the launch.

• To be launched in October 2018, and supplant the Hubble Space Telescope.
• Search for the first galaxies or luminous objects formed after the Big Bang.
• Determine how galaxies evolved from their formation until now.
• Observe the formation of stars from the first stages to the formation of planetary systems.
• Measure the physical and chemical properties of planetary systems, including our own Solar System, and investigate the potential for life in those systems.