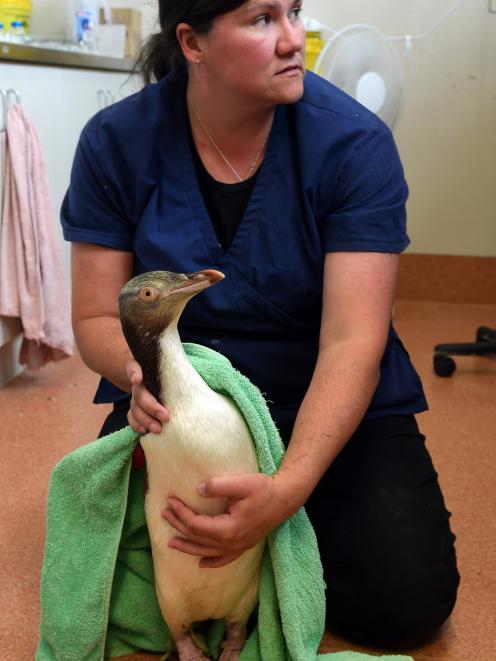 Wildlife veterinarian Dr Lisa Argilla treats a penguin at a temporary penguin hospital at the Otago Polytechnic veterinary school. Photo: Stephen Jaquiery.
Funding for a Dunedin penguin hospital which has saved 6%  of New Zealand’s yellow-eyed penguin population is set to run out this month.

Yellow-eyed Penguin Trust general manager Sue Murray said funds raised by the trust to run the hospital in conjunction with the Otago Polytechnic, St Kilda Veterinary Centre and Penguin Place would run out on March 17.

Penguin Hospital co-ordinator Dr Lisa Argilla  said 30 yellow-eyed penguins had been treated at the hospital in the past seven weeks, "a significant percentage of the current mainland yellow-eyed-penguin population."

"Without treatment, none of these birds would have survived."

The end of the "pop-up" hospital meant Otago penguins needing serious treatment  would be treated in Wellington. Dr  Argilla said not having a hospital for the birds in Dunedin could lower rates of survival.

"Here, in Dunedin, we can start intravenous antibiotics within 24 hours.

"Because of that, our success rate of saving birds is much higher."

Penguins with minor injuries would be treated at the St Kilda Vet Centre, Ms Murray said.

Dr Argilla would focus on a proposal to establish a permanent Dunedin Wildlife Hospital where threatened species, including penguins,  could be treated.

Preliminary annual operating costs were estimated to be about $300,000, Dr Argilla said.

While she had other short-term work, she "believed passionately" about the need for a South Island wildlife hospital and would put her efforts into establishing one ahead of other commitments, she said.

At present, there are 250 yellow-eyed penguin breeding pairs in the wild.