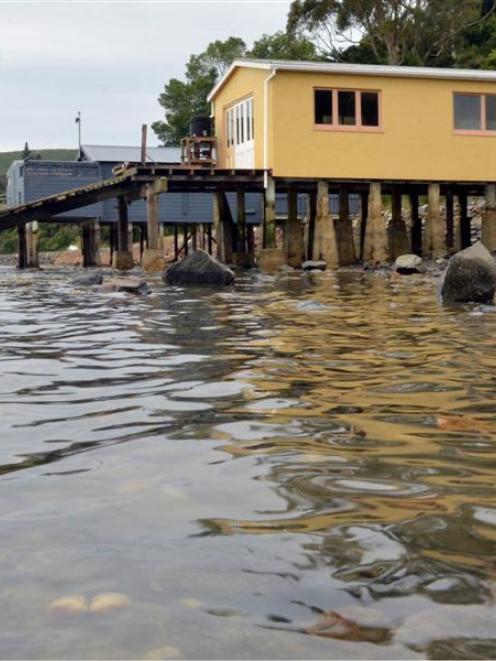 Two of the four boatsheds on Portobello Rd between King George and Camp Strs that will be shifted to allow the widening of the peninsula road. Photo by Gerard O'Brien.
For the first time boardwalks will be constructed to allow Otago Harbour's heritage sea wall to be seen as part of the proposal to ''fill in the gaps'' between the cycle and walkways along Otago Peninsula roads from Dunedin to Harington Point.

The Dunedin City Council is applying for 10 coastal resource consents from the Otago Regional Council and four land-use consents from itself to widen the road between Vauxhall and Harington Point to improve traffic safety at a cost of about $27 million.

The consent proposed the work be done in seven stages during the next 25 years and once completed would create a continuous cycleway and footpath from Dunedin to Harington Point village.

However, the work programme was flexible and depended upon community priorities and funding arrangements, the resource consent application said. It would be discussed by the city council in its upcoming annual plan deliberations.

To complete the widening, 13.4km of harbour sea wall, a listed heritage structure, would be ''entombed'' except for four lengths of between 80m and 225m considered to be of high heritage importance by the New Zealand Historic Places Trust, the application said.

Those stretches would only be covered by a boardwalk for use by cyclists and pedestrians.

The widening also meant several boatsheds would need to be relocated further into the harbour, while others would need their access reconfigured.

''It is stressed that any relocation will be no more than is required to accommodate a widened road.''

The widening would also allow for bays to be formed so buses could pull off the road and for the Portobello Boat Club to be relocated to solid foundations instead of piles.

The road could be raised in those areas to decrease surface flooding and it is proposed to use large rocks where there is significant boating activity, such as Portobello jetty, to minimise wave reflection.

Ecological assessments done for the previous widening work completed in 2011 indicated the road improvements appeared to have very little effect on the ecology of the intertidal environment along the stretch of Otago Harbour coastline, the report said.

''Any effects observed in the two post-construction surveys have been minor or transitory, with a slight improvement in diversity and abundance of intertidal animals.''

However, the issue of cumulative effects of progressive reclamations, as up to 20% of cobbled intertidal zone might be lost following the completion of all the work proposed, needed to be ''seriously considered'', the report said.

''It is considered that on balance, any adverse effects, particularly on heritage, are either mitigated or offset by the positive aspects of these applications, these being road safety improvements.''

Submission on the applications close on February 17 at 5pm.

• Involves 13.4km to be done in seven stretches