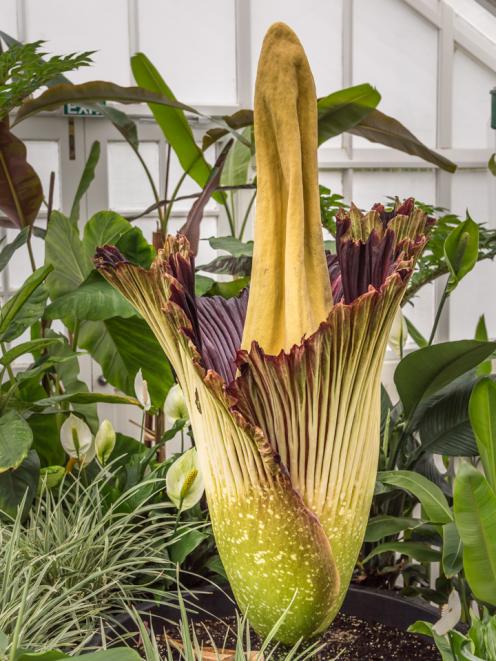 The rarely-opened flower had already closed, but scores of people still flocked to the Dunedin Botanic Garden yesterday to take a last whiff of the plant.

Garden collection curator Stephen Bishop said that he and other garden staff had recently asked many visitors what they thought the plant smelt like, and the answers went well beyond merely rotting flesh.

Smelly socks and rotting cabbage were among the comparisons, and one child, unusually, suggested carrot cake.

Some people had found the smell relatively mild while others found it more repellent, he said.

The odour was unusual, and he was impressed by the spectacle of seeing the world’s most southerly flowering corpse plant (Amorphophallus titanum), he said.

Mr Bishop said that about 10,000 people visited the garden’s Indonesian plant in January 2018 when it bloomed for the first time.

And several thousand people trooped through the Winter Garden glasshouse last weekend to see and smell the massive, rare flower, on only its second appearance.

The rarity of the flowering had helped attract attention, Mr Bishop said.

The corpse plant flower could grow up to 3m long, and although the Dunedin flower was half that size, it was still impressively big, he said.

It was unclear exactly how many people had visited at the weekend, but it had been the garden’s busiest weekend since 2018, he said.