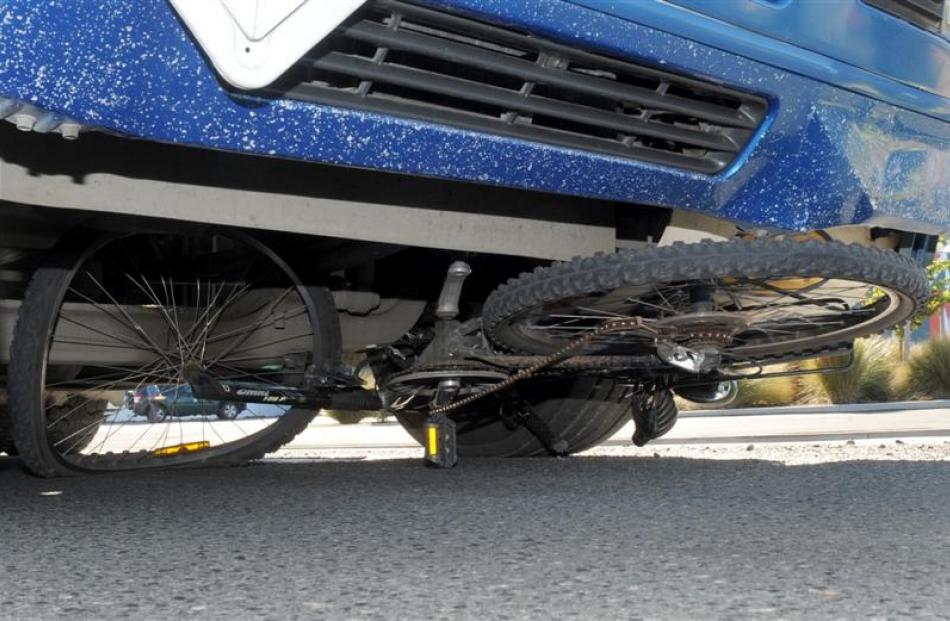 A cycle lies wedged under a truck in Strathallan St, Dunedin, yesterday after the rider was knocked off in a collision with a truck. Photo by Stephen Jacquiery.

Two recent incidents where cyclists were knocked from their bikes by heavy trucks highlight Dunedin's issues with heavy vehicle traffic and the need to explore a wider range of prevention measures, cycling advocates say.

Such measures could include making safety guards on trucks mandatory.

Spokes Dunedin spokeswoman Erika Buky said she was saddened to hear yesterday that a second cyclist in as many weeks was in a collision with a truck in Dunedin.

A man (45) was knocked off his bike in Strathallan St about 8.40am by a truck and trailer unit turning into the street from a driveway, police said.

He fell away from the truck, receiving only minor injuries, but the bike was dragged under the front wheels of the truck for at least 10m.

Last week, a 54-year-old man was killed when his bike was dragged under a truck on State Highway 1 near Anzac Ave.

While the benefits of cycling still outweighed the statistical risks, the two recent crashes showed the city had to seriously think about preventive measures like separated or buffered bike lanes on busy routes; regulatory changes like lower speed limits; changes to vehicles, such as equipping heavy trucks with safety guards (also called under-run protection) and better mirrors; more rigorous enforcement of speed and traffic laws and more safety education for all road users.

"The city's planned strategic cycling network could make cycling safer and easier for all these people; but according to the current schedule, it won't be complete until 2030 at the earliest. The events of the past few days tell us that's too long to wait."

She also wanted trucking companies to look at what they could do to lower the inherent risk of trucks to cyclists and pedestrians.

Dunedin City Council infrastructure services committee chairman Andrew Noone said he was sure the council's plans to improve the cycle network were probably too long term to satisfy all road users, particularly cyclists, but it was a matter of improving the infrastructure to the highest standard possible with the money available.

"We are getting a little bit done each year, and when there is a hot spot, we will target it, but I don't know if there is any easy fix here."

Cyclists were vulnerable when it came to any collision with a truck, even one at low speed, because of the mass of the heavy vehicle. Reducing speed limits therefore made no sense safety-wise, and certainly none economically.

Putting under-run protectors on the side of trucks had been tested and was not practical, he said.

The only sensible approach was to give cyclists their own space on the road, well separated from other traffic.

He said the industry was serious about road safety and trucking companies did take part in courses specifically educating truck drivers about sharing the road with cyclists.

Cycling Advocates Network (Can) spokesman Patrick Morgan confirmed such courses were available, although none had been held in Dunedin yet.

A Can analysis of 65 fatalities involving cyclists on New Zealand roads between January 2006 and June 2011 showed 6% of them involved a truck or bus, he said.

Although crash circumstances varied, it was common for a cyclist to be caught on the left-hand side of a truck (possibly turning left) and be swept underneath the truck wheels, which was why Can had been calling for under-run protectors to be made mandatory for more than a decade.

It was compulsory in Europe, but was recently rejected by regulators in Canada.

Ways to reduce cycling deaths are also being investigated in an inquiry initiated by the chief coroner late last year.

Waikato coroner Gordon Matenga is holding inquest hearings in six regions to hear evidence on 13 cycling deaths in 2010 and 2011.