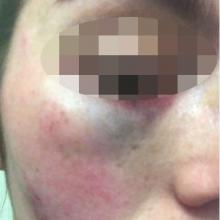 A 25-year-old woman says she filmed a police officer minutes before he attacked her. Photo: supplied

Police are investigating allegations an experienced Otago police officer subjected a woman to a vicious attack while he was off-duty.

The 25-year-old complainant said she was at a fancy-dress birthday party on Saturday night when the alleged assault took place.

She said the man, who was wearing a wig at the time, smashed her face into the bonnet of a car before dragging her down a driveway on her front.

The pair had never previously met, she said. ''He just lost it.''

The Otago Daily Times has chosen not to identify the officer involved, the woman or the town where the alleged incident took place.

A police spokesman said police were aware of a complaint about an off-duty officer early on Sunday.

Police would not confirm whether the man remained at work.

''An investigation has commenced, and any specific actions required regarding the individual will be determined as the investigation progresses,'' the spokesman said.

The woman said she arrived at the party about 8pm but others had been drinking since noon.

The revelry moved from a house to a nearby pub and back again.

During that time, the complainant was confronted by her friend's partner, who accused her of being a bad friend.

While drunkenly gesturing, he inadvertently hit her in the face.

She said she ran off crying and was followed by a man she did not know, who turned out to be the long-serving officer.

Concerned, she pulled out her cellphone and filmed the ''friendly'' exchange.

''He was talking away really nice and calm,'' she said.

After calling another friend to pick her up, the woman went to get her friend, who also wanted a lift, but one of the partygoers began swearing at her.

The police officer allegedly joined the calls for her to leave, which was when she told him about earlier filming him.

''[He] grabbed me and put me against the car, then he had me by my head and he slammed the whole side of my face into the bonnet of the car.

The woman alleged the man also showed her his police identification.

''He put my arms behind my back and dragged me down the road on my stomach,'' she said.

The woman eventually got away and locked herself in her car before she was picked up and taken to a police station.

Officers photographed her injuries and she gave them her clothes and the video she took on her phone for evidential purposes, she said.

The complainant was taken to hospital. Although no severe injury was discovered, she said the pain was excruciating.

She said she was now so scared she was staying with her mother in another town a long distance from her home.

Her mother said she had called police to ensure they were taking the allegation seriously and was concerned by reports the man was still working and had not been interviewed.

She also tried to contact police commissioner Mike Bush but said she had not been able to speak to him.

It is understood Dunedin police are investigating the case.

''Police take any allegations against staff seriously, and they are always thoroughly and professionally investigated,'' a spokesman said.