Predator Free Dunedin’s vision of a pest-free city has received a major boost after it secured a $7 million funding injection to allow the conservation collective to expand its area of operations.

‘‘The funding will allow us to link up significant parts of the landscape and accelerate predator control,’’ he said.

Predator Free 2050 Ltd, the Crown-owned company established to deliver on the Government’s goal of eliminating stoats, rats and possums by 2050, committed $4 million of the funding.

.Ready for action to expand their vision for a pest-free Dunedin are (from left) City Sanctuary’s Zac Martin, Kate Tanner and Catherine Bradley, Predator Free Dunedin’s Kimberley Collins and Sally Peart (chairwoman) and Halo Project’s Jonah Kitto-Verhoef. PHOTO: STEPHEN JAQUIERY
Since it started in 2018, PFD has removed 45,000 predators from 30,000ha of Dunedin’s urban and rural land.

The funding has been secured and will be paid in regular installments until 2025.

More specifically, possum control would embrace an additional 33,000ha in an area that included the Silver Peaks in the west.

Possums would also be targeted on over 10,000ha in West Harbour and Mount Cargill, and in those areas they would be controlled to zero density, which meant they would not be able to reproduce.

On the Otago Peninsula to the east, PFD aimed to eradicate possums by mid-2023 and then focus on mustelids, with the aim of eliminating stoats by 2025. 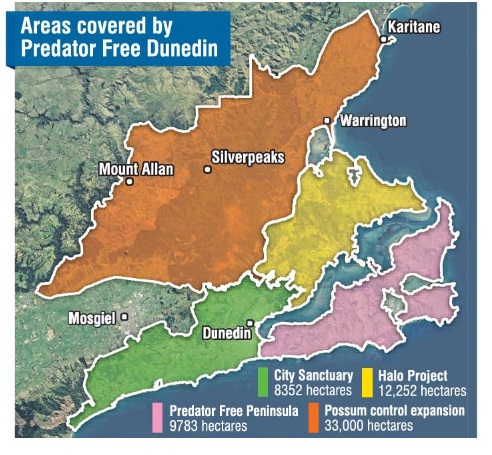 ‘‘Predators destroy our native fauna, such as fern birds and the South Island robin, but they also ruin forests, the habitats of these animals.

‘‘Our forests will thrive without predators.’’

Excellent initiative and well due. Does that include cats, both domestic and feral?? All irresponsible cat owners say, "not my cat", but who's then... All cats are native species killers.
Barry

I fully agree with Barry Walker's comments and his challenge for action on the impact of cats to our environment.
As top level predators cats are a major threat to wildlife. This has been well documented, and management solutions have been suggested.
Why this risk is not being properly addressed then, when so much effort is being made to deal with other predators, is something our councils should be answerable for.