Projects a boost for city firms 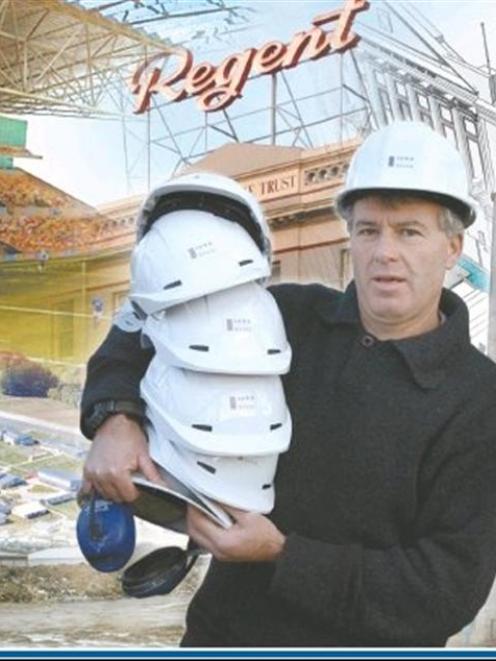 Looming big projects in or near Dunedin (clockwise from top left) include the Forsyth Barr Stadium, the Regent Theatre upgrade, the Dunedin Town Hall redevelopment, the next stage of the Otago Settlers Museum upgrade, the building of the Bunnings Warehouse and major changes to the Otago Corrections Facility at Milburn. The projects are welcomed by companies such as Lund South and its Dunedin manager, David Low.
Two Dunedin companies have secured an $8 million contract, and work for up to 50 of their employees, at the Forsyth Barr Stadium site.

The deal could not come at a better time for the companies, as many construction firms are waiting for a series of big city projects to begin.

Among those on the horizon are the Dunedin City Council's $45 million town hall redevelopment, and planned - but not confirmed - $4.4 million Regent Theatre upgrade, as well as the next stage of the Otago Settlers Museum upgrade, a multimillion-dollar upgrade of the Otago Corrections Facility and the construction of an $11 million Bunnings Warehouse in South Dunedin.

Amalgamated Builders Ltd (ABL) and Lund South staff in Dunedin made a combined bid to secure the subcontract for concrete work associated with the stadium's two main stands.

Asked yesterday if the contract had been confirmed, Lund South Dunedin manager David Low said "for all intents and purposes, yes".

ABL Otago area manager Richard Johnston also confirmed the deal, saying: "We have been told it's a formality".

ABL and Lund staff spoken to yesterday were excited by their stadium success, which would provide work for about 25 of ABL's Dunedin workers and "20 plus" Lund workers.

"Securing this contract saves quite a few jobs for us," Mr Johnston said.

The firms are the first Dunedin companies to be revealed as having successfully tendered for stadium-site construction work. ABL had its head office in Invercargill, but only staff from its Dunedin branch would be working on the stadium, Mr Johnston said.

The main contractor for the project, Christchurch-based Hawkins Construction, has been working with Carisbrook Stadium Trust officials to complete a list of subcontractors. Trust officials were to review recommendations by Hawkins before releasing a complete list of companies to have successfully tendered.

The stadium project is expected to employ up to 600 workers during its two-year construction. Another Christchurch-based firm, Daniel Smith Industries, has already been named as the subcontractor for piling work, and Dunedin company Hall Bros Transport Ltd for demolition work.

Mr Low said some of his staff were being asked to take annual leave and "we are not the only ones doing that" in Dunedin.

The projects could even act as a magnet attracting builders based outside Dunedin, particularly in Central Otago and Queenstown, who were already looking to "spread their wings" in the hunt for work, Mr Middlemass believed.

He was "probably getting two phone calls a week" from builders in Central Otago searching for work. That could change when construction of the new projects began, as attracting bigger companies to those projects could free up smaller projects for the city's smaller companies, he said.

"At the moment, we certainly need the work. We are all mucking around doing small jobs and they are hard to come by, and we are fighting for them."

He doubted the list of projects would stretch construction capacity in the city, although the workload "could be an issue" for smaller sectors with limited capacity, such as plumbing.