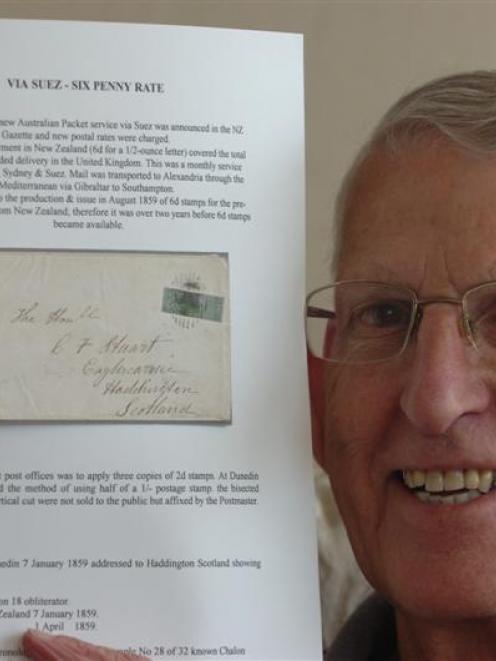 Greg Francis displays one of the most valuable items in his gold-medal-winning postal history collection. Photo by Peter McIntosh.
A Dunedin stamp collector has won gold at a world exhibition in Prague.

Greg Francis (68), of Waverley, was one of five New Zealanders invited to submit collections to the Praga 2008 World Philatelic Exhibition and he was the only one to collect a gold medal.

Mr Francis presented about 200 original envelopes which had either been posted from or posted to Otago since 1840 - part of his postal history collection.

"Postal history is actually collecting the markings and the rates and the routes of letters as opposed to postage stamps," he said.

His oldest letter was posted on March 17, 1840, from Port Otago by the captain of the whaling ship Columbus to the ship's owners in Fairhaven, Massachusetts.

Because stamps were not in use then, the letter has a handwritten mark showing US14c had been paid.

Mr Francis has spent 50 years building up his collection of envelopes sent to or from the goldfields.

Pride of place is held by the only known surviving envelope destined for Gabriels Gully, near Lawrence.

It was posted to the gold receiver, a Mr De Lacey, in July 1861, only two or three months after gold was discovered.

Mr Francis also has one of only three envelopes postmarked "Otakou".

The letter was sent from Edinburgh in 1848 and stamped Otakou when it arrived in New Zealand.

However, Mr Francis said Presbyterian settlers Thomas Burns and William Cargill took issue with Catholic postmaster John McCarthy's use of the name Otakou and, in 1848, the settlement's name was designated "Otago".

Mr Francis said he was delighted to have won the gold medal, which arrived in the post yesterday.

His interest in postal history began when he was given a large bundle of stamps at the age of 8 and found one postmarked "Spit".

Intrigued, he and his father discovered that "The Spit" was the former name of Port Ahuriri, Napier.

"I started from there.

''I went through all these bundles of stamps and took out all the postmarks and I've been collecting ever since."

He would not reveal the value of his collection.

Greg Francis displays one of the most valuable items in his gold-medal-winning postal history collection.

The one shilling stamp was cut in half in 1859 because the new Suez Canal route halved postal rates between New Zealand and Britain. Photo by Peter Mcintosh.