Rash not down to fertiliser use 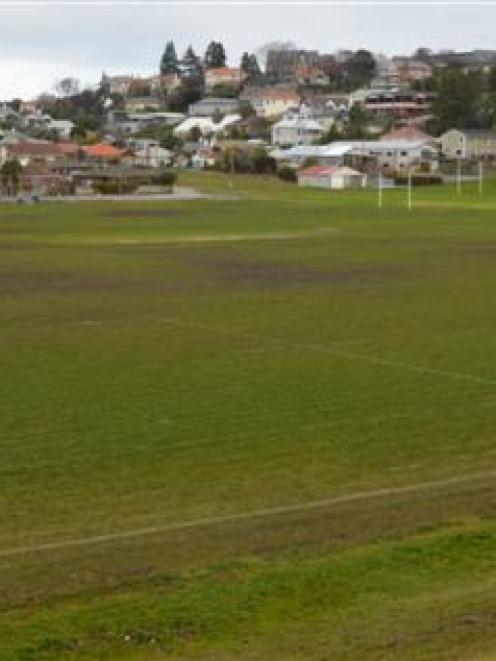 The Bishopscourt No 1 ground. Photo by Gerard O'Brien
The cause of a rash that affected at least seven senior Dunedin rugby players remains a mystery after soil tests showed no fertiliser build-up that would have caused the outbreak.

Although Dunedin City Council sports ground managers say they believe there is no reason why the ground should not be played on because the orgins of the rash remain unclear, a decision is yet to be made about whether to reopen it for the remaining few weeks of the season.

Bishopscourt No 1 ground was closed and soil samples taken for testing after five Southern and two Kaikorai players complained of getting a rash after a game there two weekends ago.

Rugby officials suspected fertiliser used on the field the week before the match might have contributed to the reaction in players, but the city council says the tests showed only a slightly higher than normal amount of trace elements in the soil.

The ground had fertiliser applied the day before the game, but only potash, and it rained that night, after attempts to continue spreading the normal potash-urea mix were abandoned after one sideline next to the bank was done, because the mix was too damp.

Sport services officer Nick Maguire did not believe the pitch was the cause of the rash.

The slightly higher result was likely normal as the field

had had the potash-urea mix spread the day before the test was done, in the same manner as all city sportsfields regularly did throughout the winter season.

He had not heard of cases of rash from people using this or any other ground before, despite the grounds commonly having fertiliser spread the day before matches.

He concluded that the slightly higher reading should not be enough to cause a skin reaction.

Testing the field for bacterial content would require an extensive process involving soil scientists and would only be sensible if there had been some diagnosis of what bacteria had caused the rashes.

His research had shown it was unlikely bacteria could survive at colder temperatures anyway, unless an animal or other source was more or less constantly living on the field.

Dogs defecating on sports fields were an issue, but for so many people to get a rash the field would have had to be extensively fouled, Mr Maguire said.

Southern Rugby Club premier team co-manager Mike Regget had heard fertiliser was the issue, and was surprised to learn it was not. Two of his five affected players missed last week's game because he did not want to risk their health, but all were fit again for this weekend.

They had all been treated with antibiotics, but none had had their rash tested.

Kaikorai Rugby Club chairman Ron St Clair-Newman said he was suspicious it was small build-ups of fertiliser because it had happened once before.

As far as the state of the Bishopscourt grounds went, he said they had been ''like that'' for years and ''nobody ever got anything [unhealthy] off them''.

Cuts and infections were not unusual among rugby players during the season and team physios and medics carried antiseptic ointments as a precaution against bacteria and infection.

The two Kaikorai players with rashes were recovering. A suggestion one required hospital treatment for the rash was incorrect, he said.

Otago Rugby Football Union community services manager Richard Perkins said whether the field was used again would have to be discussed. He wanted to see how players were before any further decisions were made about the matter.